2 Gay Pastors Paraded On The Street In Enugu, Nigeria For Having Sex

Enugu, Nigeria: 2 Christian church leaders, a pastor and Apostle have been arrested and detained in Ngwo community in Enugu, after they were caught having sex in the middle of the night. 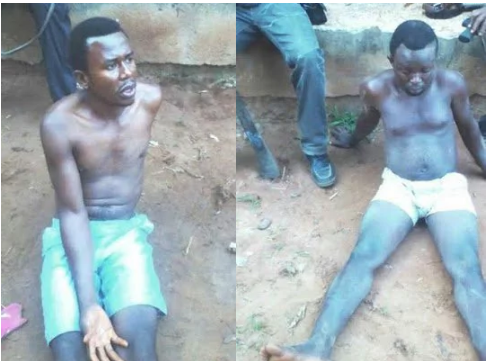 According to local media, around 1:00am, a vigilante group monitoring activity in the area apprehended a pastor and apostles who had been previously reported to be in a gay relationship. The two were caught and detained by the vigilante group who had kept a tab on the pastor after he was reported to have molested a twelve year old boy, and ejaculated in his mouth.

He had previously ever having anything to do with the young boy, but after he was exposed and asked about the act, he said "I only masturbated him and kissed him"

Homosexuality is an act that is frown upon in Nigeria and other African countries, and anybody caught in gay relationship or caught having sex with same gender can face a minimum of 14 years in prison.

There is no gay rights in Nigeria.