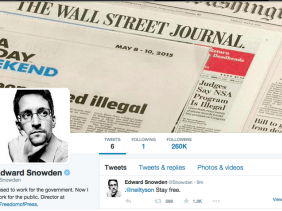 NSA whistleblower, Edward Snowden is now live on Twitter, and has been getting buzz from people as he has 362,000 followers at the time of this writing. The whistleblower who was famous after leaking different information on how  government accessed citizen information has decided only to follow his old employer, NSA.

Though he has not tweeted much in his account, but he is currently the director of Freedom of the Press Foundation (which advocates for transparency journalism). Edward Snowden might not be revealing a lot of information via his Twitter, as all documents with him have been given to the journalist.

The whistleblower claimed via his Twitter bio that "I used to work for the government. Now I work for the public. Director at @FreedomofPress."