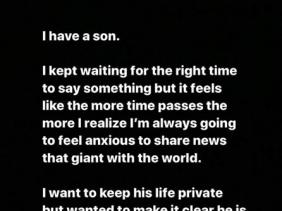 Iggy Azalea has confirmed via instagram that she is now a mother of a baby boy. The new mother while announcing the news on Instagram also narrates while she had taken her time to announce the news, writing,

I kept waiting for the right time to say something but it feels like the more times passes the more I realize I’m always going to feel anxious to share news that giant with the world. 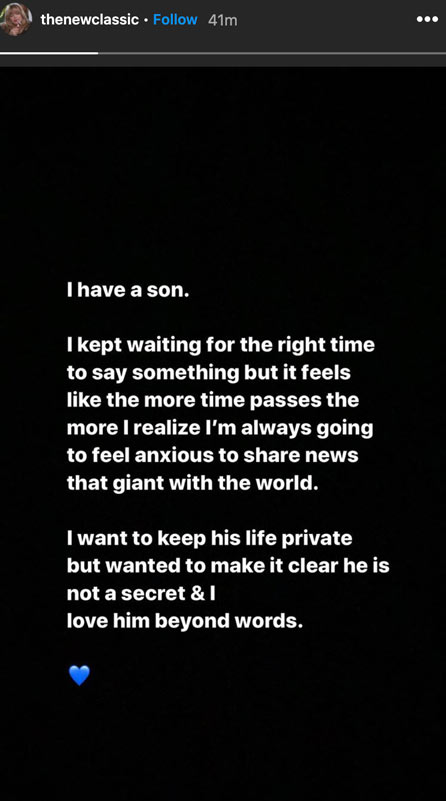 Iggy had vacated social media for five months, and only re-surfaced last month. 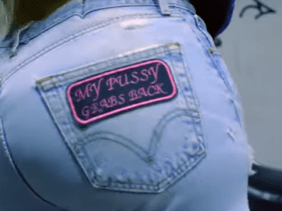 Iggy Azalea heads to Hong Kong for her new video, "Mo Bounce" and she decided to do the Twerk in the colour and dance filled video. 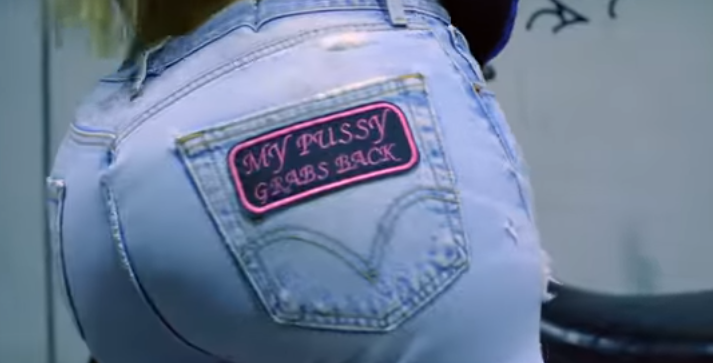 The video is more of dancing, though, was a little political when she shows a patch at the back of her jeans that reads "My Pussy Grabs Back."

Mo Bounce is a single off Iggy's sophomore album, Digital Distortion which is set to feature collaborations with Lil Uzi Vert, YG, and Jeremih. 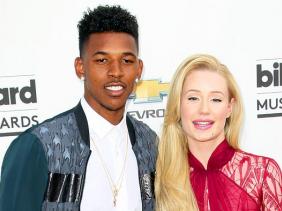 Iggy Azalea has finally tweeted the reasons she broke up with fiance, Nick Young. The lovebirds were trending on social media after Iggy threw Nick things away, and all his property was hauled away from Iggy's home. 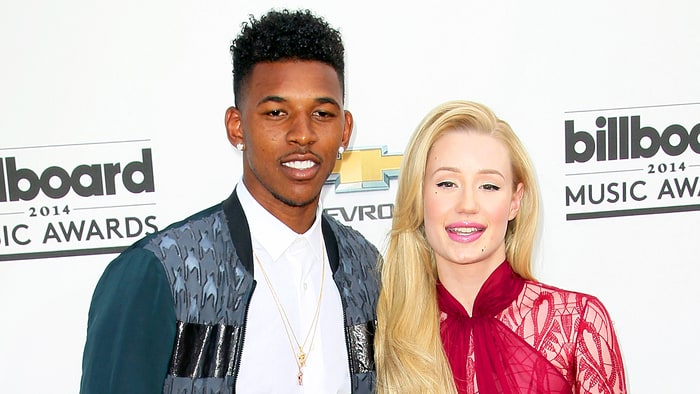 While a lot of her fans speculated that the materials were thrown away because of Nick Young past, as he had cheated on her with a 18-year old girl, and he confessed on tape, Iggy said he recently broke up with the basketball player after he caught him with different women in their homes via the security footage.

While tweeting, she also said that she is just hears about Nick impregnating his baby mama on E! News, but she had just broken up with him because of his many women. 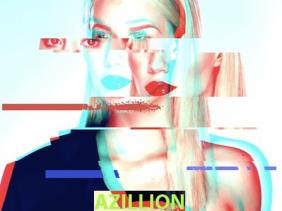 Iggy Azalea had dropped a new buzz track, Azillion. The electro banger shows the new Iggy Album, Digital Distortion, might just be a way for her to confirm her status in the music industry. 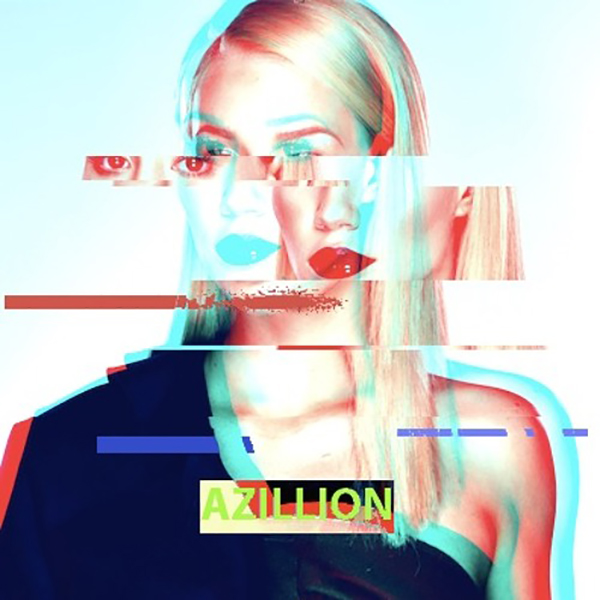 Now what’s a milli to a billion? / Forget a billi, keep it trillion / We lookin’ pretty in the building / Lookin’ like a trillion, feelin’ like azillion..

Iggy is currently working on her new album,and according to her fiance, Nick Young aka Swaggy P; "“It’s gonna be the best album of 2016" he told Billboard in an interview. 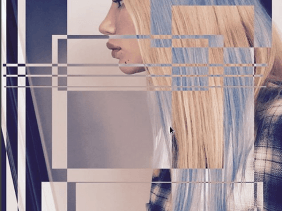 Aussie rapper, Iggy Azalea has announced the title of her sophomore album, and it is titled, "Digital Distortion". The rapper casually dropped the name of the album while replying a fan on Twitter today, she said, "Digital distortion is not a song title, its the name of my album" The album is the follow-up to her album, "The New Classic", which boasted of 2 hit singles, "Fancy" and "Black Widow", and was nominated for 2014 grammy's award. 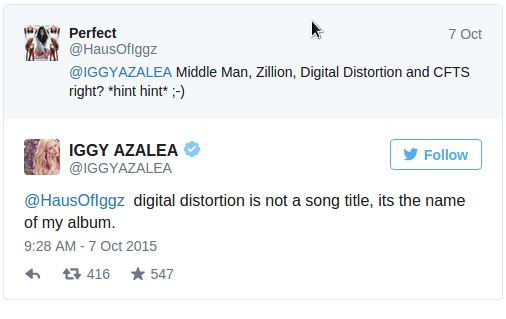 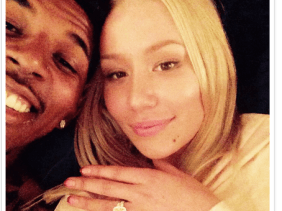 The "Fancy"rapper, Iggy Azalea is engaged to his Los Angeles Lakers boyfriend, Nick Young. Young proposed on Monday night at a carnival in L.A. He got down on a knee and popped the question while family, friends looked on.

The 10.43 carat ring from Jason of Beverly Hills is valued at $500,000. Iggy’s ring features an 8.15-carat yellow cushion cut centre stone with 2.28 carats of white diamonds set into 18-karat white gold. According to E!Online News.

Will you marry me? Nick asked Iggy on his bended knee, and she replied "Yes".

Stylist and The Real host, Jeannie Mai posted a picture on Instagram with caption, 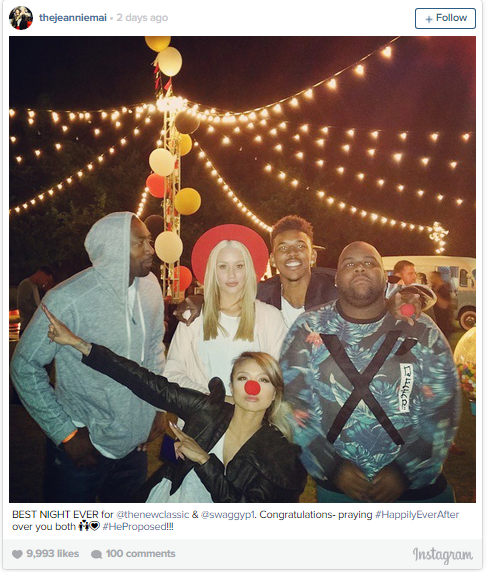 Nick Young also posted the photo where she is kissing the 24 year old rapper, with a caption :

She said yes. It's over man. I'm getting married

Iggy also shared the lovely moment on her instagram page showing the massive ring, with caption: 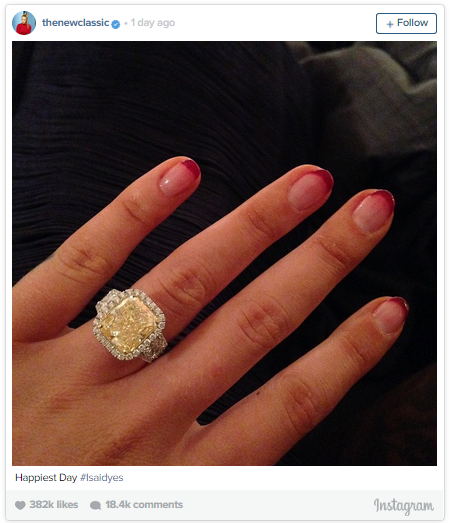 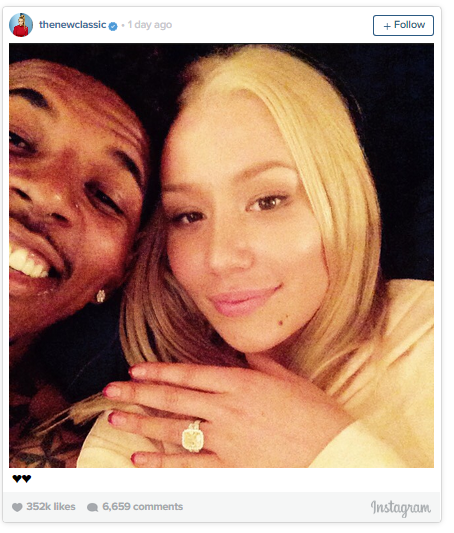 “Nick was very involved in designing the ring,” Jason Arasheben, CEO of Jason of Beverly Hills, tells E! News. “We wanted it to be both a ring of Iggy’s dreams and a ring that fit her personal style. It is always an honor when a client trusts me to help design a ring that symbolizes one of the most important decisions of their life.”