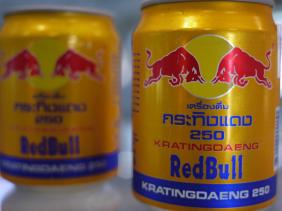 Redbull is an energy drink that if you drink every time might lead you to an untimely death. Some of the deaths that can be caused if you drink too much of this energy drinks includes heart attack, kidney failure, stroke, even death. In 2009, it was reported that Chloe Leach, 21, might have died from her consuming of four cans of Redbull on a night out with her friends. Miss Leach died of a heart condition that was possibly triggered by the Redbull.

1. Redbull cause heart disease complication. The caffeine in Redbull can cause problems with the heart if taken too much, and would kill the drinker, just like Chloe.

2.A lot of people get addicted to Redbull in a short amount of time because Redbull contains cocaine. A can of Redbull is said to contain 0.4 micrograms per litre in the drink, and dude to this, Redbull has been banned in different stores.

3. A lot of party goers now uses Redbull to reduce the alcohol level in their vodka or drinks, this is a deadly mix. According to a study from the University of Northern Kentucky, the mixup can lead to impulsive behaviour.

4. Redbull causes Kidney failure, and one of this is the incident that happened in Sweden. The Three boys had just practiced hard in training, but one of them took several cans of Redbull and had a kidney failure leading to his death.

Though the investigation into his death was inconclusive, experts believe that plenty of Redbull could be harmful to the kidney.

5. Redbull energy drink will cause a heart attack or stroke, and can be dangerous to people already vulnerable to this attack. According to Australian researchers, Redbull causes the blood to be sticky and abnormalities in the blood, which can then lead to stroke or heart attack.

6. Redbull causes caffeine intoxication, which can then cause problems like  tremor, anxiety, restlessness, tachycardia, and even death.

7. Schools now banned the drink after they noticed behavioural problems like students getting hyperactive, noisy.