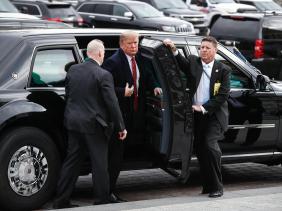 The F.B.I have started an investigation on the U.S President Donald Trump on whether he is a secret agent working for the Russian government. The investigation started days after Trump fired F.B.I director, James Comey for his investigation into Russia meddling in the U.S election.

The intelligent investigators are looking to see if Trump has fallen under Russia influence, and also if his actions could constitute a threat to National security. The president suspicious activities during the 2016 elections had raised an alarm of the president if he was working for the Russians ,and also when he later said he had fired Comey because he was tied to the Russia investigation.

According to former F.B.I James A. Barker, if the President had fired Comey to stop the Russia investigation, that would mean the the Bureau would not understand how Moscow had integrated itself into the election, and how many Americans had conspired to join Russia to meddle into the election.

Mr Trump's lawyer, Rudy Giuliani tried to dismiss the investigation and said “The fact that it goes back a year and a half and nothing came of it that showed a breach of national security means they found nothing,” and he is yet to hear of any investigation from the bureau about the investigation. 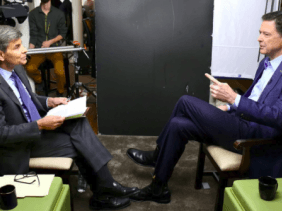 Former FBI director, James COmey in a recent interview believed that the Russian government might have compromising information on U.S President Donald Trump.

He made the statement in an interview on ABC, but before the interview on Sunday, the President had started a Twitter war on Comey, calling him a 'slippery" and added that the former FBI director is "the WORST FBI Director in history, by far!” Comey in his interview said the various actions by the U.S President shows that there are “some evidence of obstruction of justice” in the president’s actions and that Trump is “morally unfit” for office. The former FBI director talked about his firing in May because he was looking into the election meddling by the Russians in the U.S. election, even though Trump has tweeted the investigation is a witch hunt, and himself or his team have no collusion with Russia.

Comey said the President is morally unfit, and gave a sample of the event in Charlottesville;

A person who sees moral equivalence in Charlottesville, who talks about and treats women like they’re pieces of meat, who lies constantly about matters big and small and insists the American people believe it — that person’s not fit to be president of the United States, on moral grounds.

Attacking Comey before the interview, Trump denied he ever asked Comey for a loyalty pledge,but the firing of James Comey caused another scramble at the Justice department that led to Attorney-General Jeff Session recusing himself from the investigation, and the appointment of Robert Mueller, which had since led to the investigation of 19 people, and this include the Trump’s former campaign chairman, Paul Manafort and former National Security Adviser, Michael Flynn. 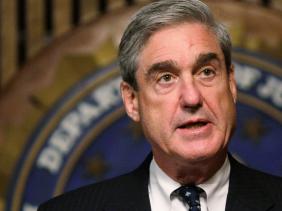 President Trump has started to feel the heat from Special counsel Robert Mueller, and at the end of of the investigation, Donald Trump attempts to screaming "fake news" or the president calling the investigation a "witch-hunt" might be finally over, and we might be looking at a resigning of Trump or impeachment.

The Russian meddling of the 2016 election has been a cloud over Trump's cabinet since his inauguration, but Trump has repeatedly denied any collusion with Russia, calling it a hoax, and a made up story by the Democrats. During the 2016 election, Trump repeatedly calls on the Russians to find dirt on Hillary Clinton, and also the 30,000 emails that she claimed was deleted. Also, his top advisers, also met with the Russians, asking for dirt on Trump's opponent, Hillary Clinton.

Trump in the past had issues with his businesses, and U.S. banks stop loaning his businesses funds. So he had turned to Russian oligarchs close to the Kremlin to help him with bailout funds, which he was given. After the presidential race turned out to be between Hillary Clinton and Donald Trump, Russia then treated Trump as an asset, and later worked against Hillary Clinton to elect Trump.

None of the allegations have been connected to Russia strongman, Vladmir Putin, but U.S. Intelligence officials believed that such a massive plot cannot happen in Russia without a go ahead from Putin.

A bill of Trump's impeachment will likely include his connection with the Russian, the finances of his business and the meetings of Trump's family members with Russia oligarchs.

On a normal day in the U.S., the president of the Republic would have ordered a full scale investigation into the Russia meddling in the election,but Trump is not like other 44 past presidents, instead he appointed a committee on election integrity headed by Vice President Mike Pence and Kris Kobach to find out why Hillary Clinton won the popular vote, based on his belief that California had used illegal immigrants to vote.

The committee collapsed before it even started.

The current level of Mueller indictment makes it too late for Trump to fire Mueller now, if he tries it, the Congress will look into obstruction of justice, and that will lead to an impeachment. 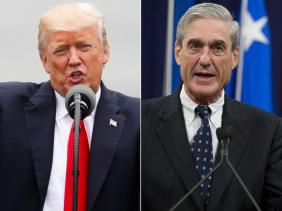 When Don McGahn received the order to fire Mueller, he refused to ask Justice Department to fire Mueller, as this will have a very adverse effect on Trump presidency. Mueller gets to know of the Presidential order after investigators interviewed Senior White House officials.

In August, when the special counsellor to the President, Kellyanne Conway was asked on ABC if the President is considering firing Mueller, she said "The president has not even discussed that, I can tell you as his counselor, he is not discussing that."

Trump argued that Mueller is not fit to investigate the case for three reasons;

-A previous dispute over membership fees at the Trump National Golf Club in Virginia.

-Working at a law firm that had previously represented Trump's son-in-law Jared Kushner.

-Mueller previously interviewing with the FBI to potentially return to lead the agency after the firing of James Comey.

Both Democrats and Republicans have said that firing Mueller will be a major red line for the President Trump presidency. Sen. Mark Warner, the top Democrat on the Senate Intelligence Committee in a statement said that;

I’ve said it before, and I am saying it again: firing the Special Counsel is a red line that the president cannot cross.Any attempt to remove the special counsel, pardon key witnesses, or otherwise interfere in the investigation, would be a gross abuse of power, and all members of Congress, from both parties, have a responsibility to our Constitution and to our country to make that clear immediately.

Sen. James Lankford, a Republican who also sits on the Intelligence committee said;

The White House and the president have said repeatedly, most recently yesterday, that they will comply with the special counsel and investigating Committees. So, I think we should take the White House at their word.

Mueller was not the one Trump was considering to fire, Trump was also looking to fire Deputy Attorney General Rod Rosenstein,the man who appointed Mueller after the attorney General Jeff Sessions recused himself from the Russia investigation.

Trump while on his way to World Economic Forum in Davos told reporters he was looking forward to speak with special counsel Mueller in two or three weeks time.