7 Ways To Detect Fakes News On The Internet

Fake news has been one of the reasons for the twist of election in the U.S presidential election, with some believing that the fake news that was being posted about the candidates might have swayed electors about Hillary Clinton.

Tech companies are now fighting against fake news in their domains, with Google taking the first step by banning Adsense account of websites that publish fake news, and Facebook has said it will start allowing users to report any link of fake news on the platform. To be able to help users understand how they could identify fake news, we have put together checklists of what you should look out for when you read news online that are completely false.

A News Without A Credible Source, Image Or Video: Most of the fake news that are written are most without a credible source to a known news source. The only source is their own quote, and most of the links they will share with you might be another link to another fake news website that is not credible, all written to hurt the subject.

The Headlines Are All In Caps: Fake news websites are in the good habit of making out their headline to be all caps. The headlines are done to get attention for clicks. Most of these websites on social media will then have a fake, edited images or image of an Old news as the article image.

They can write something like: "OBAMA WITHDRAWS SECURITY DETAIL FROM DONALD TRUMP TOWER BECAUSE" . A lot of social media users are likely to click on the news as the U.S election is still new, and Donald Trump is always in the middle of controversies, the word "BECAUSE" will make readers curious, and click.

This is not only a click bait, but such news is also likely not to have credible source, or any links with White-house correspondent, and might have the picture of President Obama speaking with some secret service details.

No Author Name Or Details: Most news outlet might not have names of the name of the authors of an article on their website, It is a great feature for a news website to have the thumbnail image and the name of the writer of a news article, as it will help give confidence to readers of the website.

PS: We don't have names of author on Doy News due to reasons best known to the board, but request on writers will be given if necessary to the appropriate individual.

Domain Name Stealer Or Imposters: A lot of fake news during the U.S election uses name known news website to share their news on social media. One of the news website is the abcnews.com.co, and imposter of abcnews.com.

The website uses a look-alike logo of the real ABC news,and design format, and uses a domain name that seems to go along with ABC news, but added  a .co. Unknown or inexperienced users of the internet will believe this site, but it is an example of a  fake news website

News Articles Are Listed On Snopes.com: Snopes.com is a website that fact checks all fake news online, though a lot of liars that just like to digest anything online won't like a site like Snopes, but if the news article is on Snopes, and it appears as false, then it is a fake news, as Snopes do thorough fact checking of fake news online and social media. 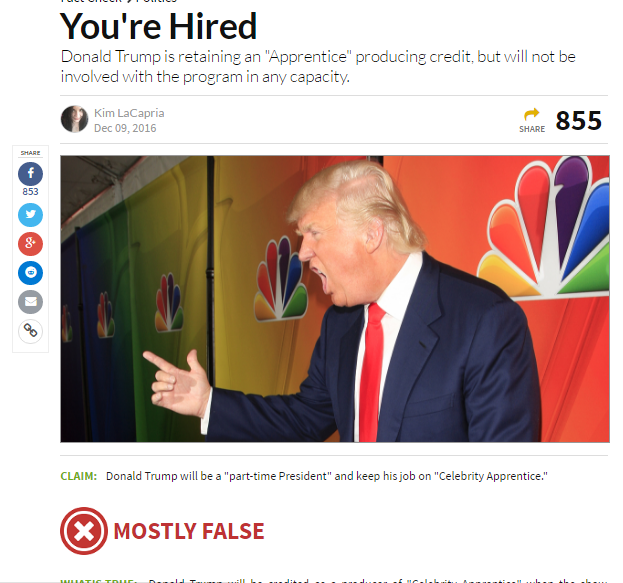 Sample of a snopes.com article.

About Us Page Disclaimer: More fake news have started to let readers know that their news is either fantasy or satire, though a lot of people don't see this, they just read and digest the news, and base their argument on it. This can be risky and wrong information or news spread real fast.

No Other Story Related To The Story: Online If a story sound so serious on a new news website, and no other news website are sharing the story, then it is probably fake news.Though a news website might get an exclusive, but it needs to show evidence of such incident to get great news following.

Some of sample of websites like this is infowars.com of Alex Jones. It is always a mixture of fake and some "Ok" news.