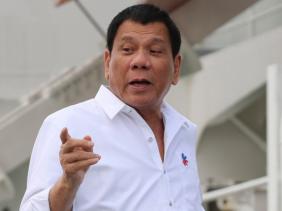 Philippine President Rodrigo Duterte seems to be happy with the Donald Trump victory in the recent U.S election, and have sent him "warm congratulations" and would also love to work with him going forward. Duterte who is one of President Obama critics and have thrown insults at him on different occasion has hailed the success of of the U.S democratic system.

In a statement released by Presidential Communications Secretary Martin Andanar,

Duterte looks forward to working with the incoming administration for enhanced Philippines-U.S. relations anchored on mutual respect, mutual benefit and shared commitment to democratic ideals and the rule of law

Duterte and the U.S have both campaigned against the political establishment in their different countries, making them win votes, and since Trump stands against the cabals, its no surprise Duterte is extending his hand of cooperation. 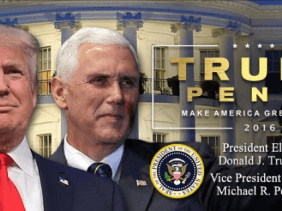 The President-Elect of The U.S, Donald J. Trump shocks the world on November 8th after he was announced as the 45th president of the United State.

Speaking after the announcement, Donald Trump addressed the crowd of supporters waiting for his speech, and informed them that his opponent, Hillary Clinton has called to congratulate him on his winning the election.

Now it's time for America to bind the wounds of division — have to get together, Trump told screaming supporters gathered at the New York Hilton. To all Republicans and Democrats and independents across this nation, I say it is time for us to come together as one united people.

Though he had never held any political office before now, Donald Trump during his campaign in June 2015 said that "the establishment" and the government have all betrayed the American people with bad trade deals, bad immigration policies and a move toward a global economy that leaves the American people behind.

In his first tweet as President-elect, Donald Trump wrote;

Such a beautiful and important evening! The forgotten man and woman will never be forgotten again. We will all come together as never before. 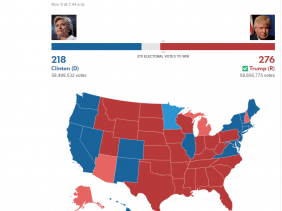 In what comes as a surprise to the majority of people inside and outside the USA, business mogul Donald Trump has won the US presidential election, and would be the 45th president of the United States.

The Republican presidential nominee cruised to victory in the battleground state of Florida, Ohio, North Carolina, Pennsylvania and Wisconsin. He won the Democratic party nominee, Hillary Clinton, and he is the 45th US president. Hillary Clinton has also called Donald Trump to congratulate him on his victory.

Speaking after his victory to his supporters in New York, Donald Trump said;

I pledge to be president for all Americans," "We are going to rebuild our inner cities... We will rebuild our infrastructure, which will become second to none. 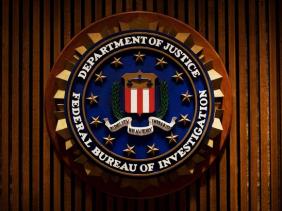 The FBI is probing a terror plan by terrorist group, Al-Qaeda, a day to US election in Texas, New York And Virginia, according to reports.

The group is planning an attack on the three states, but the location of the attack is yet unknown. According to a FBI spokesperson;

The counterterrorism and homeland security communities remain vigilant and well-postured to defend against attacks here in the United States.

The FBI, working with our federal, state and local counterparts, shares and assesses intelligence on a daily basis and will continue to work closely with law enforcement and intelligence community partners to identify and disrupt any potential threat to public safety.

The FBI is also beefing up its cyber defence system as it fears hackers might want to target its electronic voting systems on voting day. The department of Homeland security is checking and scannning vulnerabilities in the election system before the polling day.

In August, the FBI sent out a flash alert to Illinois and Arizona after detecting a breach in the voter registration database.

Experts believe that the chances of hacking the election are remote, because the machines are not connected to the internet. 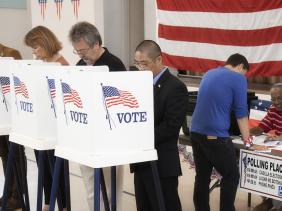 On November 8, 2016, Americans will decide on their new president between 2-popular political parties, the Republican candiate, Donald J. Trump and Democratic candidate and first woman to assume the position, Hillary Clinton.

There are dedicated supporters of Clinton and Trump. People have taken to their social media accounts to campaign for their own preferred candidates. A lot of fist thrown around, smiles, the scandal has been thrown around, and sometimes people around the world wonder if this is the American they have grown up to hear about. On November 8, when Barack Obama steps down, American would need a new president, but before you go out there, I will like to advise you on a few things to consider before you use the voting machine.

1. You are not just voting for just a month or six months, anybody you decide to vote for will be in the White house for either four, or possibly eight years. Make sure the lady or man telling you their  campaign promises can live up to that promise, because most of their decisions are what you will live through all 8 years, or forever.

3. American politics is not America football game, they are two different things. I have seen a lot of Americans standing with the party their parents or grand-parents had always been loyal to, but sometimes, we all need to take a step back and watch things and decide on our own terms.

This is your life and generation, take charge of it.

Do not vote for a candidate because they belong to your party and you want your party member to lead the country. That would be disastrous, but vote for someone that will move things forward for at least 80% American and also American allies.

4. Remember your vote is your power as a citizen. Once they get there, your power will only be used again in 4 years, unless they sleep with their intern or break some of American law. So it would be wise to not just sit on your computer shaming people or staying on reddit.

Like Obama said, "Don't boo, vote" whether you are a republican or Democrats, please go and vote.