Wale Said Meek Mill Bought A Paper To A Gun Fight During Beef WIth Drake, Meek Mill Calls Him Out

Seems Meek Mill rant on social media is about to start again after he called out his label mate, Wale on Instagram. Wale was at the breakfast club, and decided to weigh in on the Meek Mill and Drake's fight few months after after Meek Mill said Drake never writes his own song. Read the full story here.

While at the Breakfast club, Wale got real and decided not to be tiptoeing aroud the topic, he said;

“I honestly think he brought a pencil to a gun fight. He ain’t even bring a knife—a pencil. A piece of paper. He tried to paper cut him to death,” he said. “You can’t compete with somebody that got them type of relationships. I’m tellin’ everybody who thinks that Meek lost this off the strength of losing. It doesn’t matter what he made. He could’ve wrote ‘Ether 3.0′ and the opinions of the people would’ve been that their boy from Canada waxed him.”

Meek Mill who is known to be over-sensitive with issues like this went off on his instagram page, he wrote;

Ni***s b doing all this to drop a new record gossiping about they hoe ass feelings and they personal life because they miserable and nobody don't rock wit them! Really stay away from me Fam! U not MMG NOMORE! This why u can't get my number you a hoe!  and u dead cracked right now @wale foh nuttttt! I wasn't even mad at you Fam u got some real issues with yaself and you jealous! Broke rapper! This my last time I think addressing shit on the Internet .... But if I don't talk about it one of you dudes gone get hurt speaking my name like it's sweet! Y'all niggas gone stop mentioning my name like it ain't no consequences.... I'm off this internet! I don't speak on Mmg in interviews unless it's good! U a clown ... We don't wanna hear you nomore Fam! Go jump off a roof like u been tryna do chump! He not MMG IM MAKING THAT CALL ... He been tryna call me saying Rozay owe us money... He don't owe me shit and if he do I'll get it later .... Go that away! 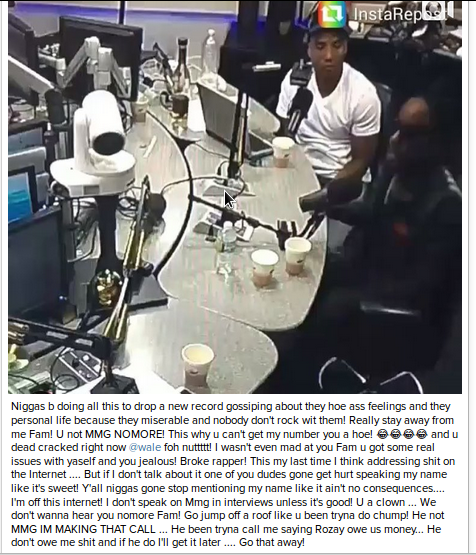 Wale also responded to Meek Mill, but with a humour, see tweet below: