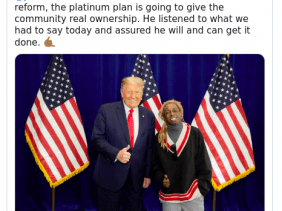 Popular US rapper, Lil Wayne on Thursday after meeting with US president, Donald Trump has now endorsed the president. In a photo posted by Wayne, he had spoken to the president on criminal reform and also his platinum plan. Wayne said Trump had promised him in the meeting that this will be done after listening to what they have to say. 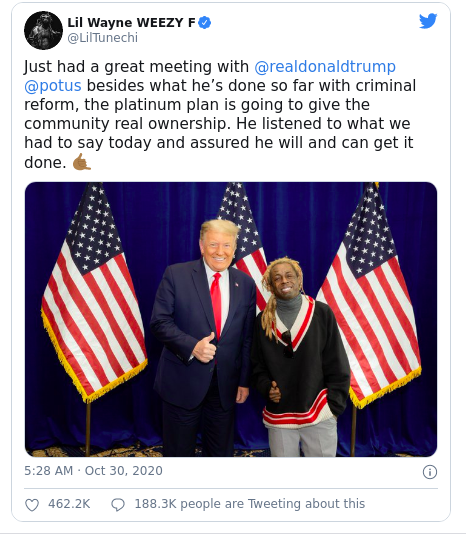 Celebrities like 50 Cent have called out Lil Wayne for his endorsement and put him on the blast on social media. Other rappers that have worked with Trump in the past include Kanye West, and Ice Cube was reportedly seen with him in the White House recently, both these men received backlash from the African-American community. 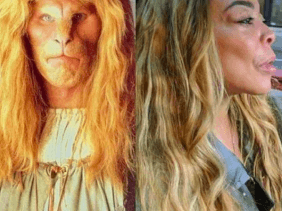 Wendy Williams, known for her gossip talkshow is now at war with rapper and business mogul, 50 Cent.

The fight started after Wendy Williams on her talk show lashed on on 50 Cent parenting skills. The talk show host send a message to 50 Cent that he should "get a life" after it 50 Cent decided to throw a "child support release party " as his child turns 21.

50 Cent took to Instagram to reply Wendy, sharing a picture of her in Bikini in the picture, and called her ugly. He wrote on Instagram;

Wendy williams just told me to get my life together, smh, your husband is not a bad man. he deserve a side chick for talking to you, you ugly motherfucker Focus on your own shit bitch. Oh yeah we in club LUST tonight you’re invited.LOL #50centralbet.

The rapper also known for use of memes or short videos to clap back at his enemies, then went ahead to compare Wendy to Ron Perlman dressed as Vincent, the 1980s TV series Beauty And The Beast.

The rapper and his son have been known to a very strained relationship, even went ahead to respond to his dad after he shared of his freedom not to pay child support anymore, his son, Marquise responded;

Damn, only if your new TV show was this funny!' 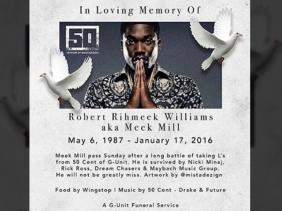 Meek Mill released a  new EP "4-4" for fans in anticipation for his Dreamchaser 4 EP, and Meek Mill doesn't have problems in dissing 50cent in the 4-4 ep for his recent bankruptcy. 50cent seems to be angry with the name calling and he had taken Meek Mill to his first comfort zone, Social media.

LMAO Hey s*** head, your career is already over. you better focus on geting Nicki pregnant so you can at least get child support girl."

Fiddy then went on to post a short video of him slapping Meek Mill while rapping, and another video of Meek Mill in the middle of Drake, Future and himself, while they laugh at him while struggling to throw a blow at one of them.

But Meek Mill is also a Twitter finger, and this time added Instagram finger to it to reply 50cent: 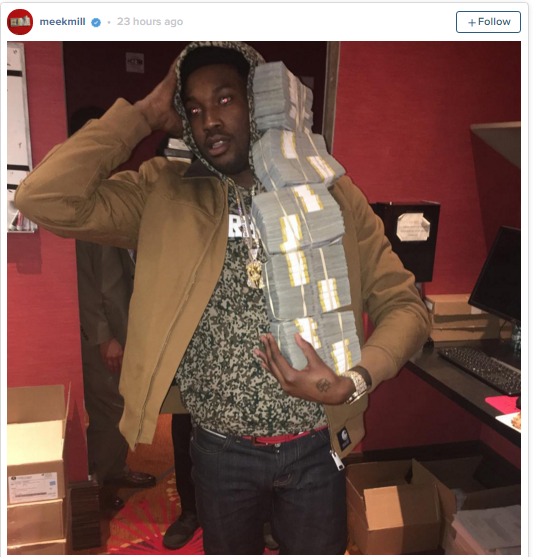 And 50cent posted a not so nice obituary of Meek Mill 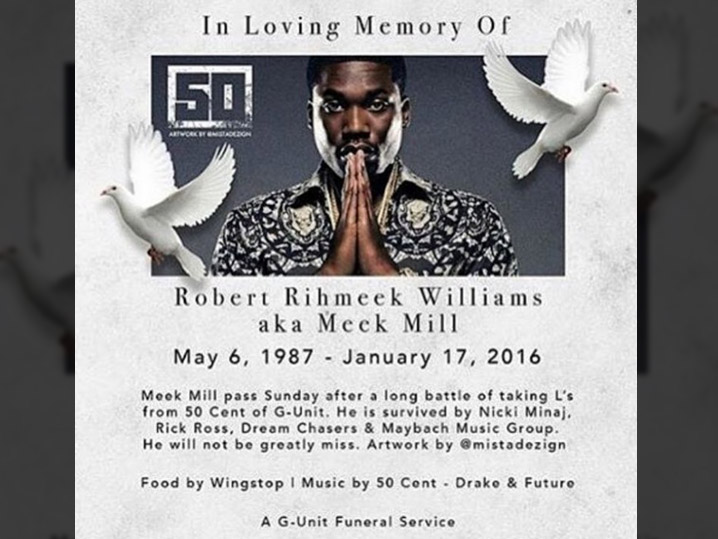 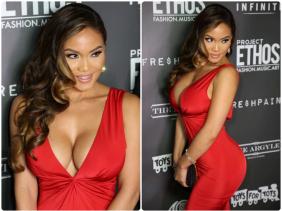 50 Cent's baby Mama, Daphne Joy is the latest celebrity to join the list of celebrities that in the past had tried using an app privately, only to find out that what they were doing is in the public domain. 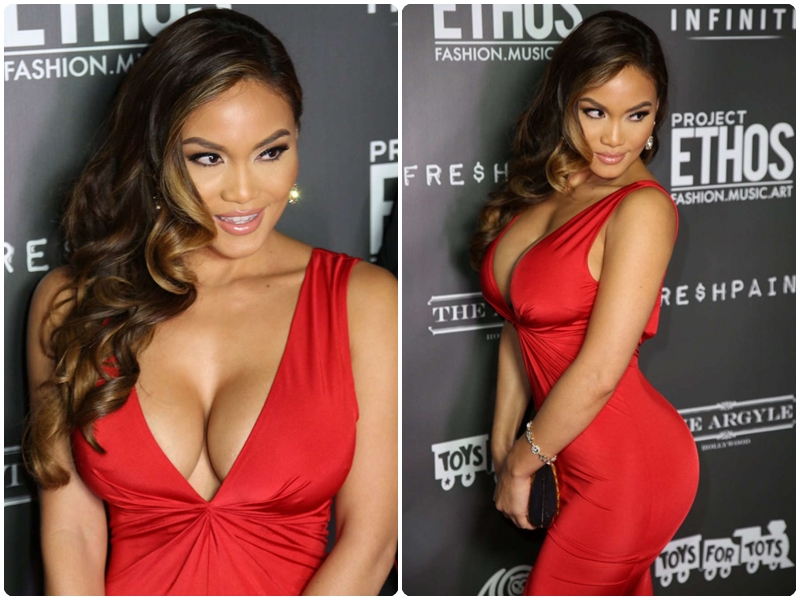 According to a report by Media take out, Joy was trying to send a snappchatted pic of "no clothes on" of herself to her new boyfriend, Jason Derulo via private message for "Jason Eyes Only", but unfortunately the pictures appeared online and seems to appear on "Everybody's eye"

To view the picture she was trying to send with no clothes on, click here 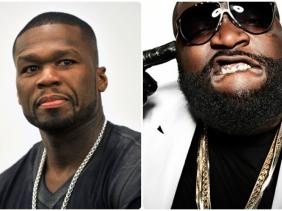 Looks like the beef between 50 cent and Rick Ross is not going to end anytime soon after after 50 cent recently re-ignited the beef in new video dissing Rick Ross "Black Market" album sale which at the time of the video recording has just sold 34,388 units.

Fifty-cent who in the video can be seen looking at his phone said Is that a rock or a brick?” Thirty-four thousand, three-hundred, and eighty-eight copies, and you know they went and bought some. He had to buy some. Anybody would have panicked.”

Rick Ross is yet to reply, but he does have a way of replying 50 cent beef in time like this

Watch the video of the diss : 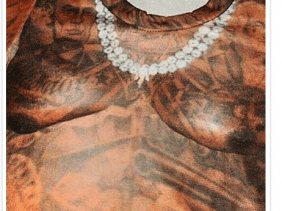 Six years On, and the fight between the two rappers, Rick Ross and 50 cent continues, as both men took to social media calling themselves names. 50 cent started the fight when he posted a T-shirt with Rick Ross "tatted torso" 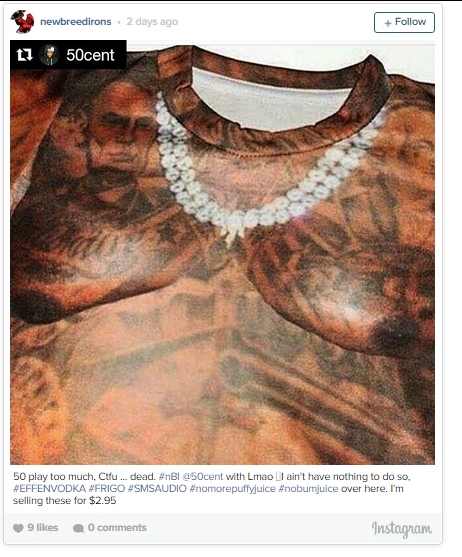 The MMG boss, Rick Ross was not happy with the post, and replied 50 cent,  mocking his recent bankruptcy case, he tweeted;

Instagram finger-triggered 50 cent decided to come at Rick Ross with different memes,  and even talk about the recent Drake and Meek Mill rap battle and brought Rick Ross son to the beef, he posted the pictures; 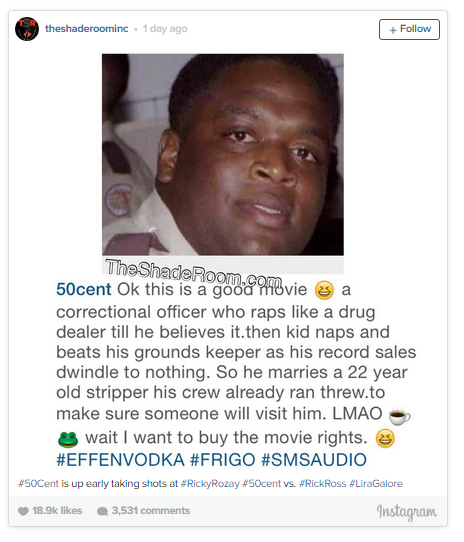 Then the Meek Mill vs Drake beef 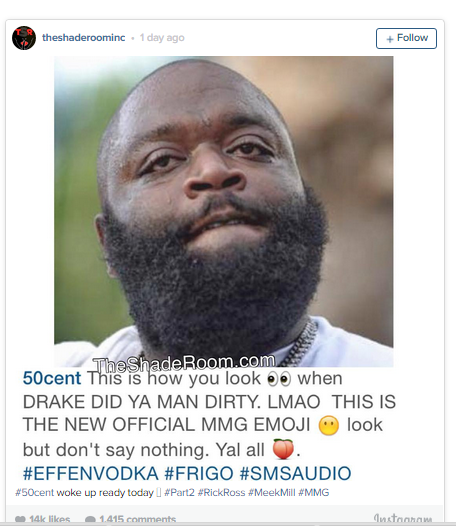 Still having fun with his Instagram memes, 50 cent decided to involves Rick Ross young boy, he pictured him wearing a MMG chain, and asking when they plan to return it. 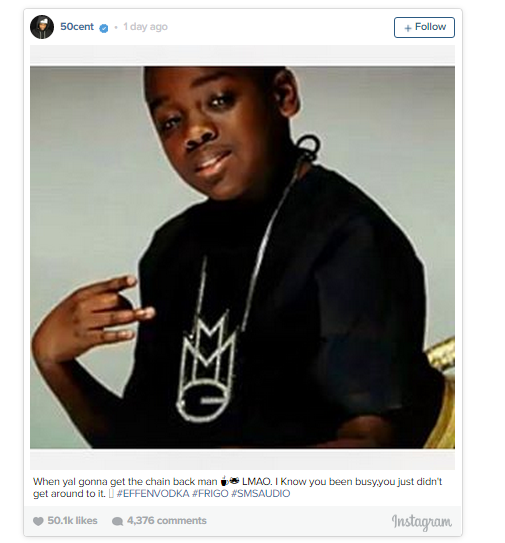 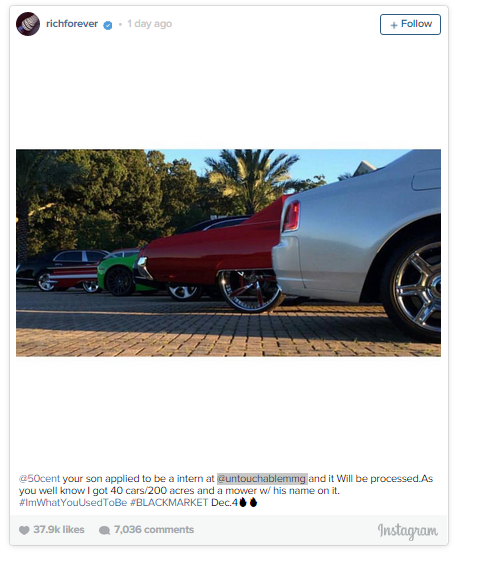 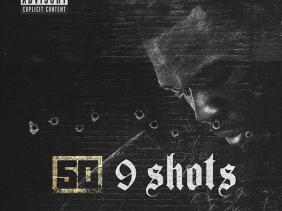 G-Unit boss takes his time off hawking EFFEN Vodka and promoting season two 0f the "Power", instead jump into the booth and reminisce about his journey and how he got here in his new track, 9 Shots.

The song, produced by Frank Dukes is the first single off his long awaited, Street King Immortal album. 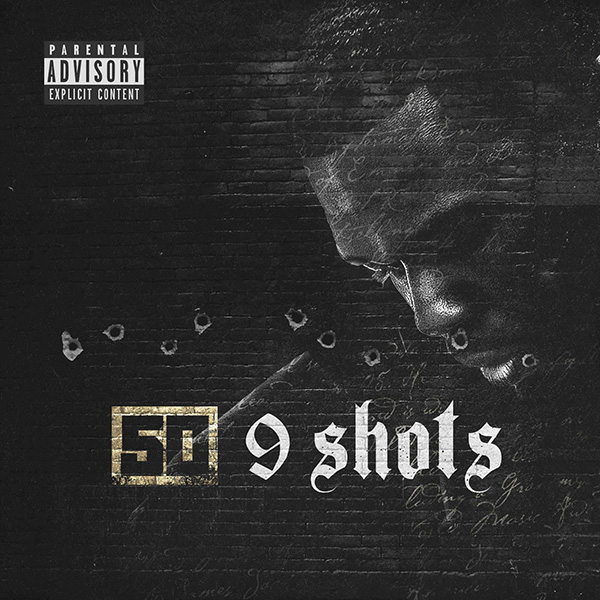 In the song, 50 cent talks about the famous time he was shot 9 times in 2000, the time he was selling drugs and also the break up with his high school sweetheart.

It’s a metaphor for nine painful moments,” explained 50 while debuting the song live in New York earlier this week.

The album, SKI is due to drop later this year. 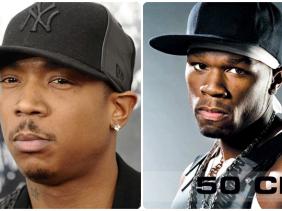 Jarule and 50 Cent beef have just been re-ignited again after a decade. The fight started after Ja Rule went on Instagram to discredit Meek Mill comparison in his reply diss song to Drake, Wanna know. 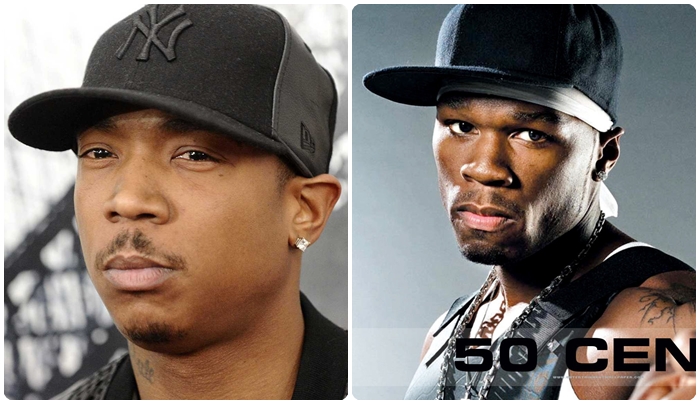 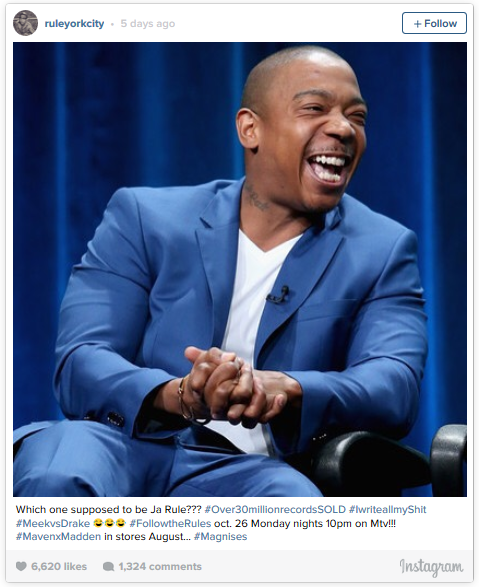 He also went ahead to Twitter to refute Meek Mill comparison of his beef with Drake with himself and 50 cent, he tweeted: 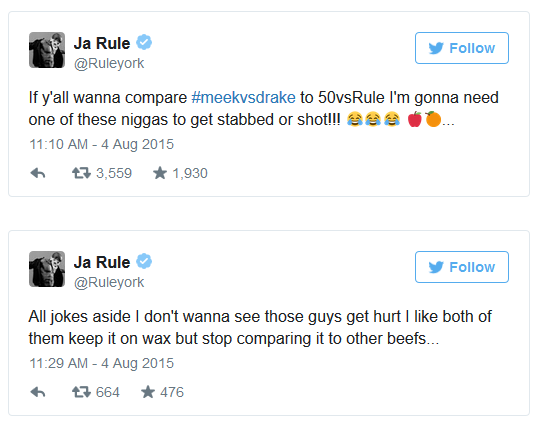 Whoops and Ja Rule snapped back to reply 50 cent again ; 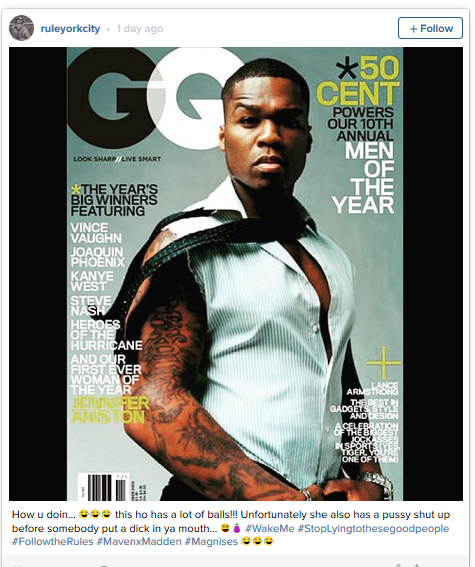 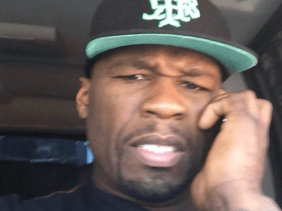 If you don't know, well, i should let you know that 50 Cent and Rick Ross are really not in good terms. So when 50 Cent heard about the arrest of Rick Ross, he went all out to mock the MMG boss. 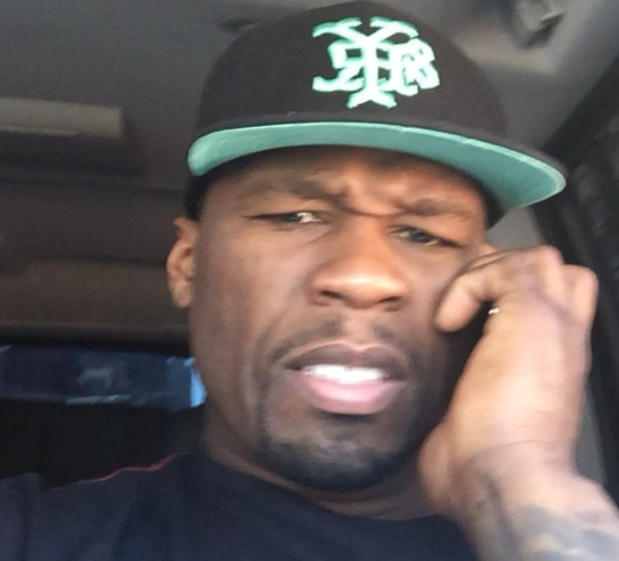 The video posted on his Instagram account, after he was arrested see him talking to someone at the end of the phone, asking who is going to bail the MMG boss out, no more Ciroc and Bellaire.