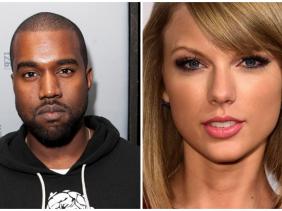 Taylor Swift has replied Kanye West in a subtle diss while delivering her award acceptance speech at the 58th Grammy award. Taylor Swift addressed the Kanye West track "Famous" he had released on his latest project, "The Life Of Pablo", where he had claimed that he was responsible for the success of the "Bad blood" singer. 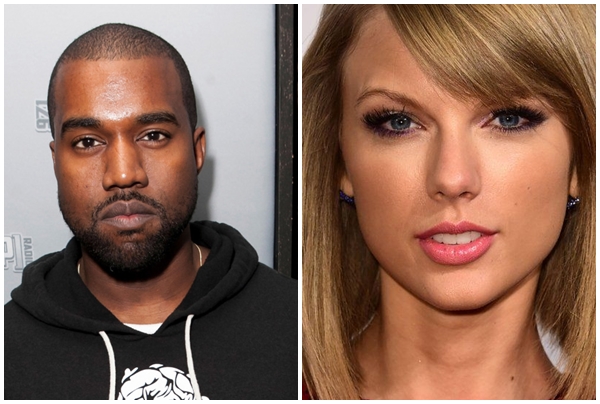 Kanye West in the track said;

Kanye West was referring to the interruption he did at 2009 VMA speech, where he said that Taylor Swift did not deserve the award she received and the award was supposed to be for Beyonce.

“I want to say to all the young women out there, there are going to be people along the way who will try to undercut your success or take credit for your accomplishments, or your fame,” said Swift. “But if you just focus on the work and you don’t let those people sidetrack you, someday when you get where you’re going, you’ll look around and know that it was you and the people who love you who put you there. That will be the greatest feeling in the world.”

Though Kanye West had clarified the lyrics on his Twitter account. He said that he had called Taylor before he released the track, but Taylor reps responded that Kanye was told not to release the track with such a misogynistic tone, but he pulled a "Kanye" on Taylor and her team. 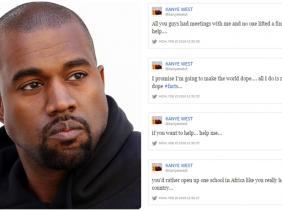 Just when we had said Kanye West had the Good, The Bad and The Ugly Week, guess he is starting a new season of that, and this time, he is starting from the ugly. Just yesterday we revealed that Kanye West was having a personal debt of $53 Million, and he had asked his fans to pray for him. 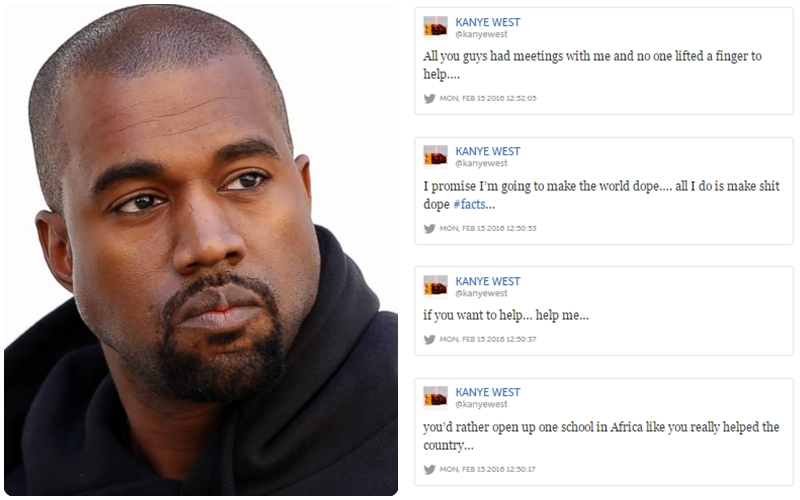 Today, Kanye West has decided to go to the mountains if the mountains won't go to him by asking the tech giant CEOs, Mark Zuckerbeg of Facebook and Larry Paige of Google to please bail him out at this time that he needed their help.

Kanye West went on a Twitter rampage on Twitter, claiming that helping him promote his art is better than building some schools in Africa.. 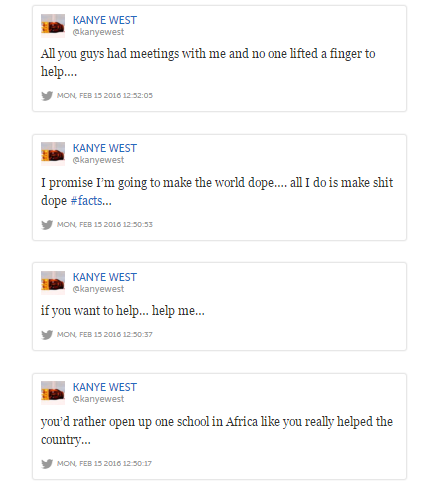 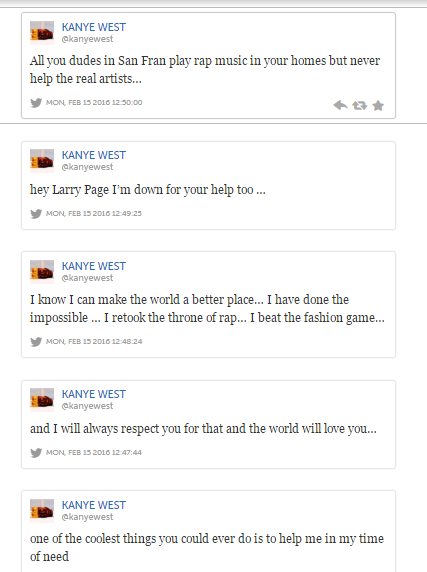 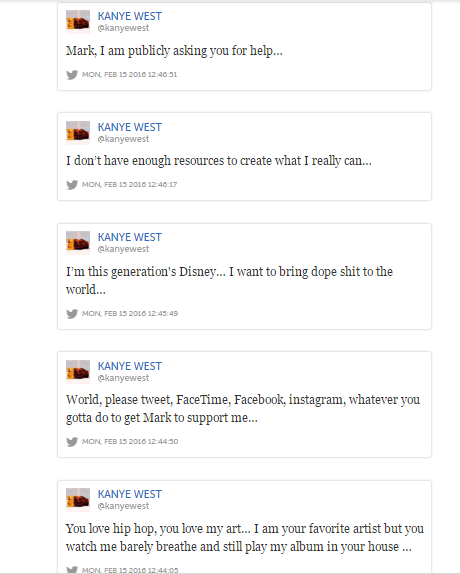 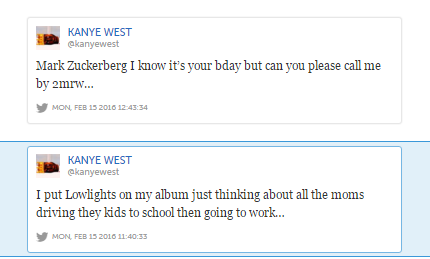 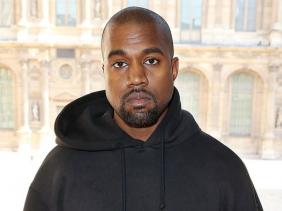 Kanye West is being in the news for all the good, the bad and now he is in the news for the ugly. Kanye West drops his 7th album, "The Life Of Pablo", this is a good news for fans of Kanye West as they had awaited his album for a long time, and we can say this the The Good. The album had generated a lot of controversy after Kanye said in the album that he would love to have sex with Taylor Swift since he was the one who had made her famous. This had caused a lot of people to call him different names including labeling the rapper, misogynist. That is not a start for a good album. So we will call this The Bad.

Just recently, Kanye West took to his comfort zone, Twitter to let people know that he is having a bad day, as he tweeted that he is $53million in personal debt, and he is asking fans to pray for him. This is the ugly side of Kanye West in a week.

So anywhere you are right now, and reading this, you should say a little prayer for Kanye West, might go a long way. 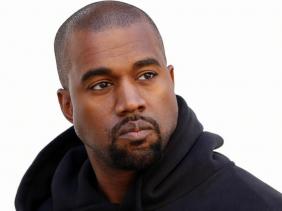 Kanye West has been on fire ever since the listening party of his new album, "The life of Pablo." The rapper had been on fire for one of the tracks, "Famous" where he called Taylor Swift a B***h and also said he would love to have sex with her. Ever since the listening party, different sections of the media have released different opinions on the lyrics, and said it is "misogynistic".

Kanye West finally responded to the all the allegations via his twitter account to clear the air. 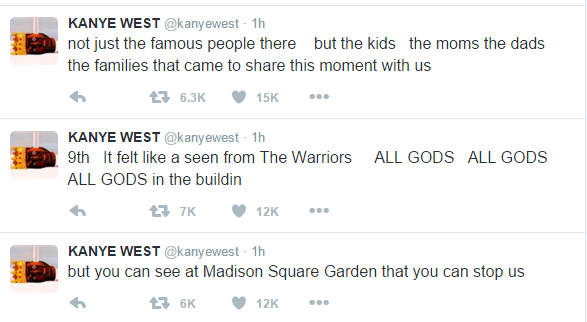 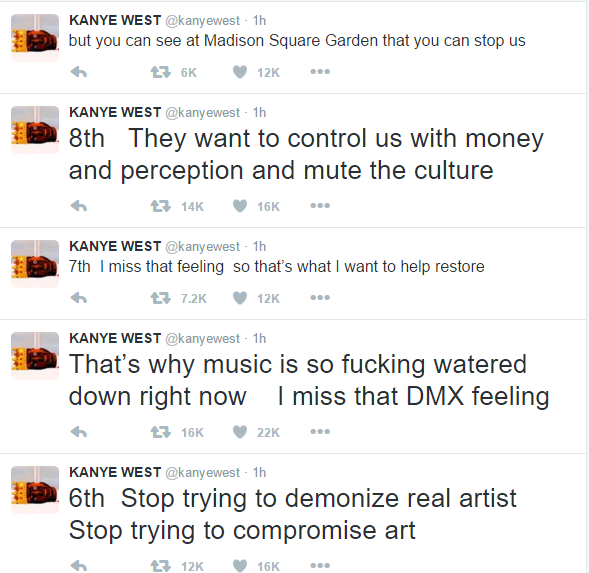 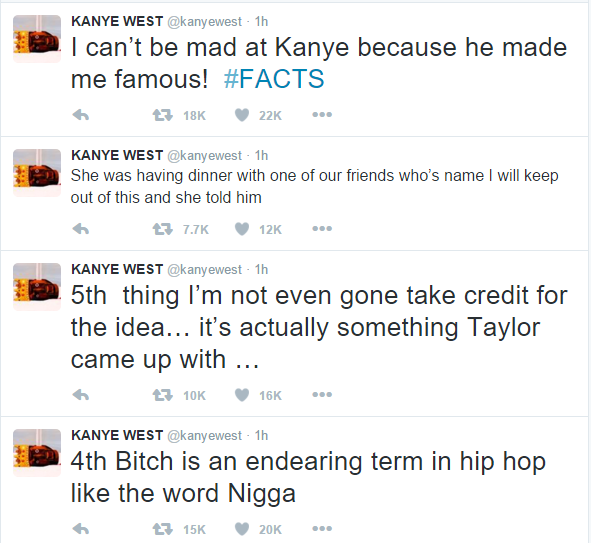 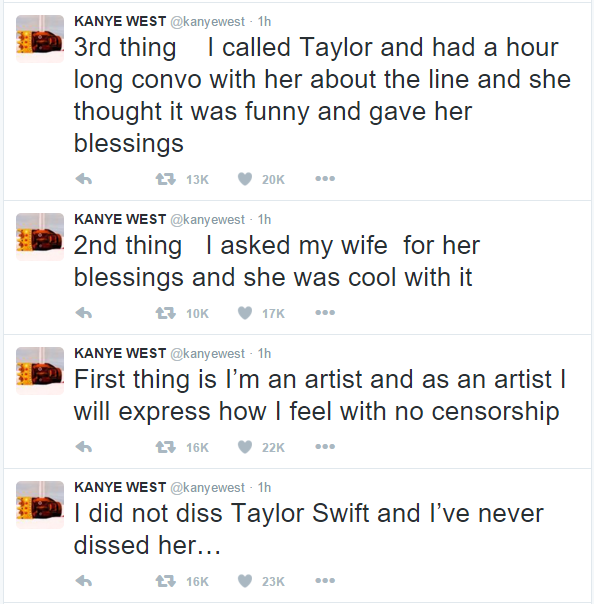 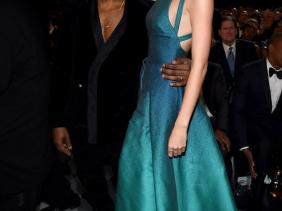 Kanye West is on his "God Forgives, I don't" mode on his new album. The rapper hosted musical fashion spectacle at the Madison square garden on Thursday and also a listening party for his new album, T.L.O.P. 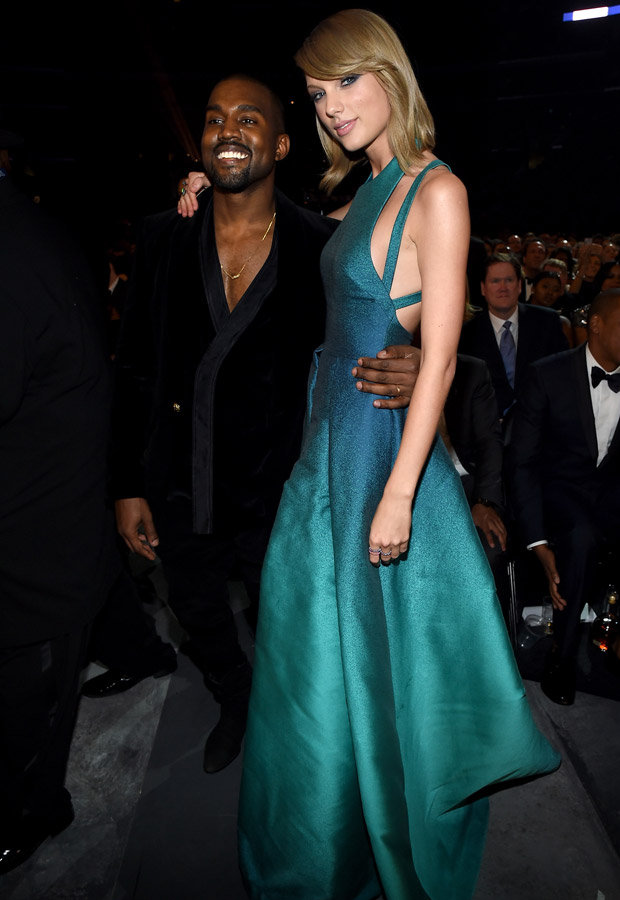 In the new album, Kanye West seems to finally have something to say about his feud with Taylor Swift during the 2009 VMAs award. The audience were shocked when he shot a diss song at Taylor Swift.

Even though the pair made up at the VMA award in 2015, when Taylor Swift presented the award to Kanye West, Kanye West had something to say on Taylor Swift;

I bet me and Ray J would be friends / If we ain't love the same bitch. He might have hit it first / Only problem is I'm rich / Uh, 21 grams superstar family / We the new Jacksons and Momma 'bout that action / I'm about that fair time 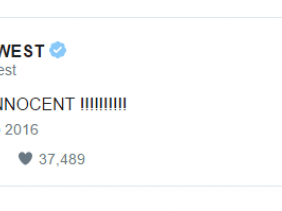 Kanye West known for speaking is mind on different issues has recently tweeted his support for Bill Cosby, the man facing various rape allegations with 35 different women, and also in court for the same offence.

Another artiste that supported Bill Cosby is rapper, Games, who posted a lengthy Instagram post in support of the comedian actor.

“Y’all put Dr. Huxtable in jail off word of mouth”

Kanye West has revealed in his recent radio interview that his upcoming album has got no name yet. Ye has changed the name of the album from So Help Me God to Swish to Waves, and now it’s untitled. 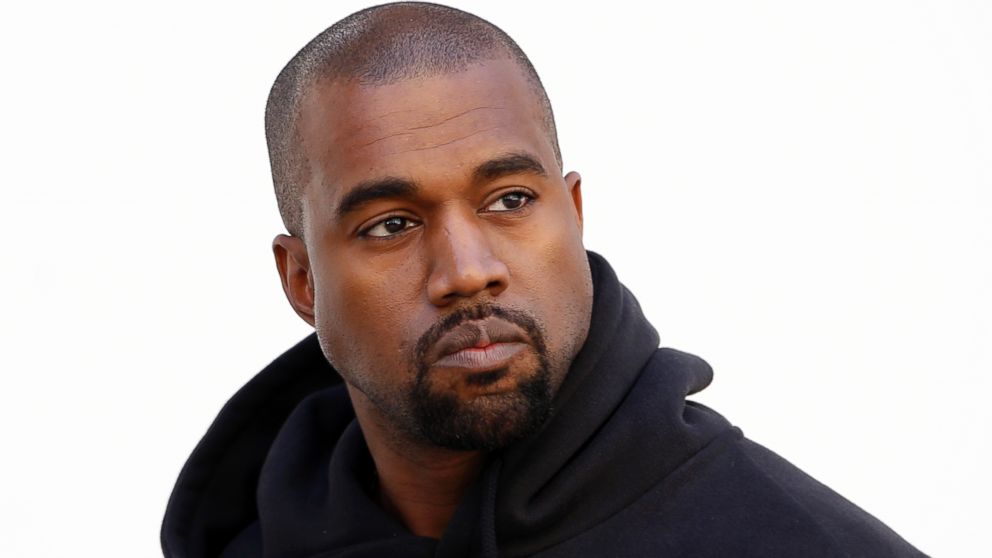 Kanye West while on the interview with Big Boy of L.A Radio station real 92.3, Kanye West also talks about his recent beef with Wiz Khalifa and how they squashed the beef;

My brother Malik Yusef got us on the phone. He’s very close with Wiz. He’s also very close with me. We chopped it up, squashed it. For people who felt a way about the kid comment, I didn’t mean it in a harmful way. I just saw my wife’s initials and reacted because that’s my family .

While talking on the recent diss by Drake on his Summer sixteen track, where he said he has a bigger pool than Kanye, Kanye West responded only saying;

I have three pools.

Listen to the full interview here: 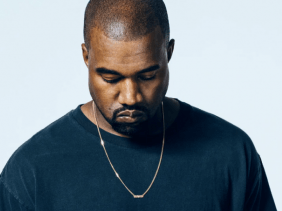 Kanye West has finally announced the released date for his seventh album "Swish". Kanye West shared the exciting news on his Twitter account “Swish February 11 16.” Kanye West is not messing around till the release date of his album as he released another tweet to warn friends not to ask him anything till he release the album. 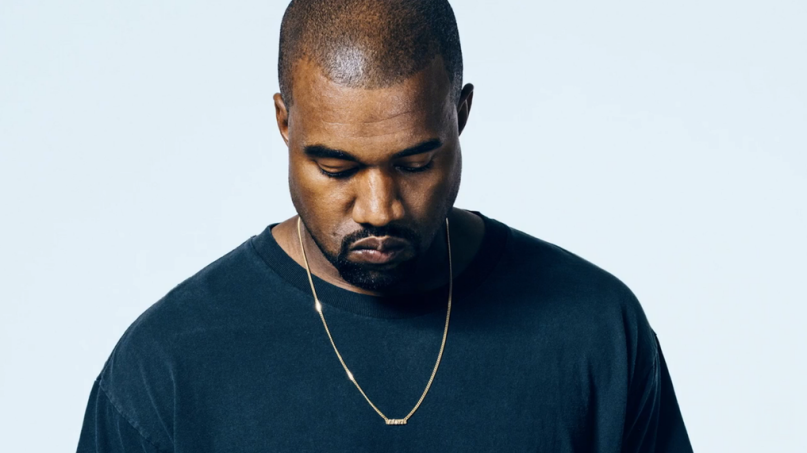 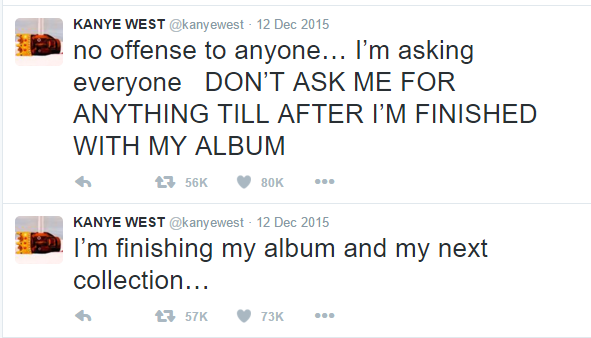 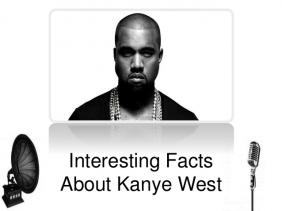 Kanye West has decided to bless fans in the new year with a new song "Facts" while they await his new album, Swish. Kanye West decided to do a track on Drake and Future's "Jumpman". And he went "Kanye" on Nike with this line "If Nike ain’t had Drizzy, man, they wouldn’t have had nothing." 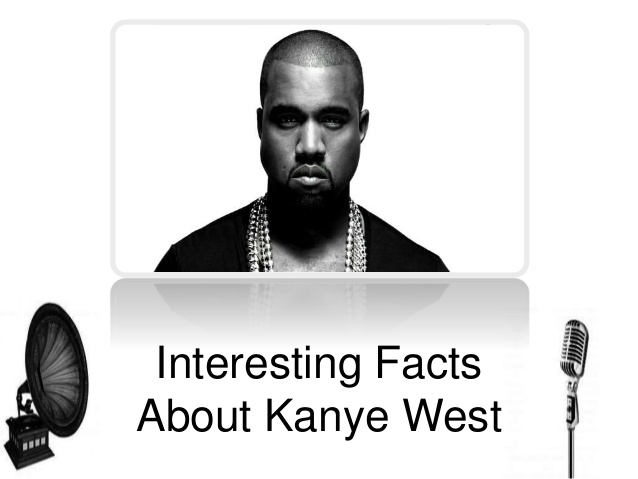 And also use the new song to remind fans and US Citizen he will be running for presidential election in 2020 with line “2020, I’ma run the whole election”, and he did not leave out recent Miss Universe controversy of Ms Universe that was done by Steve Harvey and throw shade at Bill Cosby with this line "Does anybody feel bad for Bill Cosby? / Did he forget the names just like Steve Harvey”.

This is a good year to be Kanye West fan, as we all await his album, Swish. 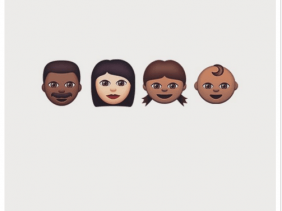 Kim and Kanye West are not waiting for the pope to confer the title of saint on their new boy, they have done it their own way. The TV reality star, Kim Kardashian-West revealed the name of the new born baby on her Instagram and website page.

The name of the new boy will be "Saint", while his middle name will be "Robert". The name Robert is given to the boy to honour the late father of Kim. 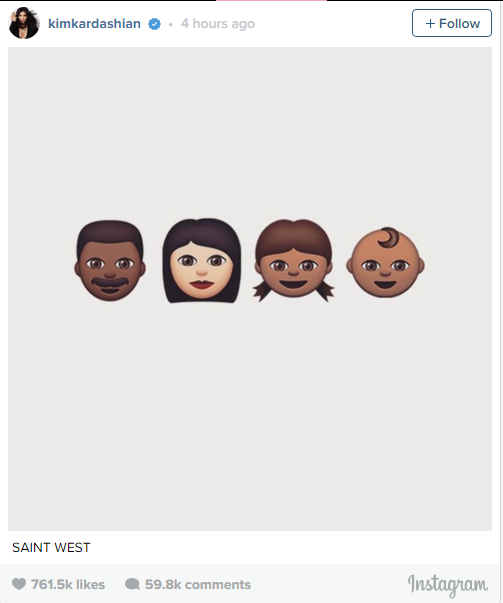