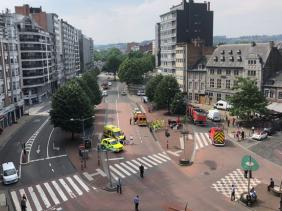 A man early this morning shouted "Allahu Akbar" in the eastern city of Belgium, Liege - before opening fire, killing a passerby and two cops were killed before the man was neutralised.

The attacked happened around 10.30am, as armed cops and siren arrives at the scene of the shootings. Onlookers scrambled around the Liege's central boulevard d'Avro. 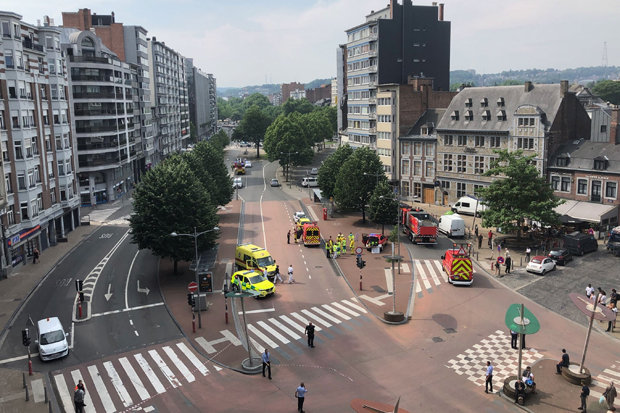 Liege was also a place of attack in 2011 after an attacker opened fire, killing four people and injuring several others.

The Interior Minister Jan Jambon said he is monitoring the situation via a tweet as investigation continues on the shooting. 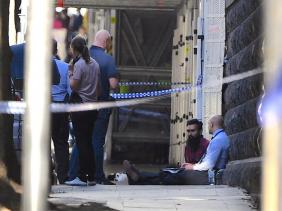 A four-wheeled drive has injured fourteen people in the centre of Melbourne, in what police are calling a "deliberate act." A lot of the injured are in critical condition as the car run into the crowds at the Melbourne’s Flinders Street station. According to Victoria Police Commander Russell Barrett while speaking to the press said;At this stage, we believe it was a deliberate act. The motivations are unknown. It’s still early days in the investigation.

According to video footage released by police when the attacker was apprehended, a man can be seen with a white shirt and blue jeans, dragged from the passenger side of the car, while others lie at the ground. Police have also arrested 2 suspects of the attack, but they are yet to be charged. 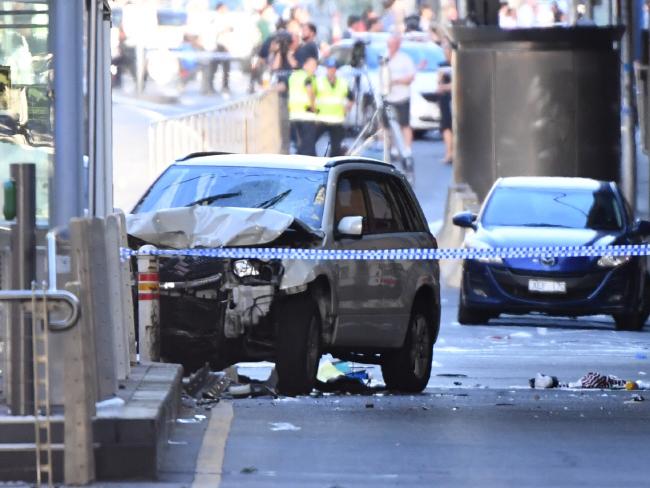 The arrested man is a 32- year old Australian man of Afghan descent, and he is was arrested in 2010 for traffic violation and minor assault, and also he is known as a drug addict.

The white 4X4 was said to have struck those crossing the  Flinders and Elizabeth streets intersection before coming to a halt near a Tram stop. 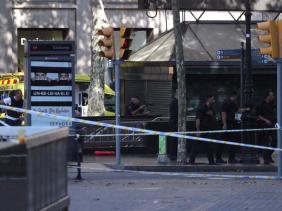 Several people have now been reported injured injured after a van rammed into several people in Barcelona's Las Ramblas tourist area, and emergency services are now warning people to stay away from the Plaça de Catalunya area.

According to Reuters, emergency services have now ordered the closure of local metro and train stations. People are also reported to be taking cover in shops and cafes. 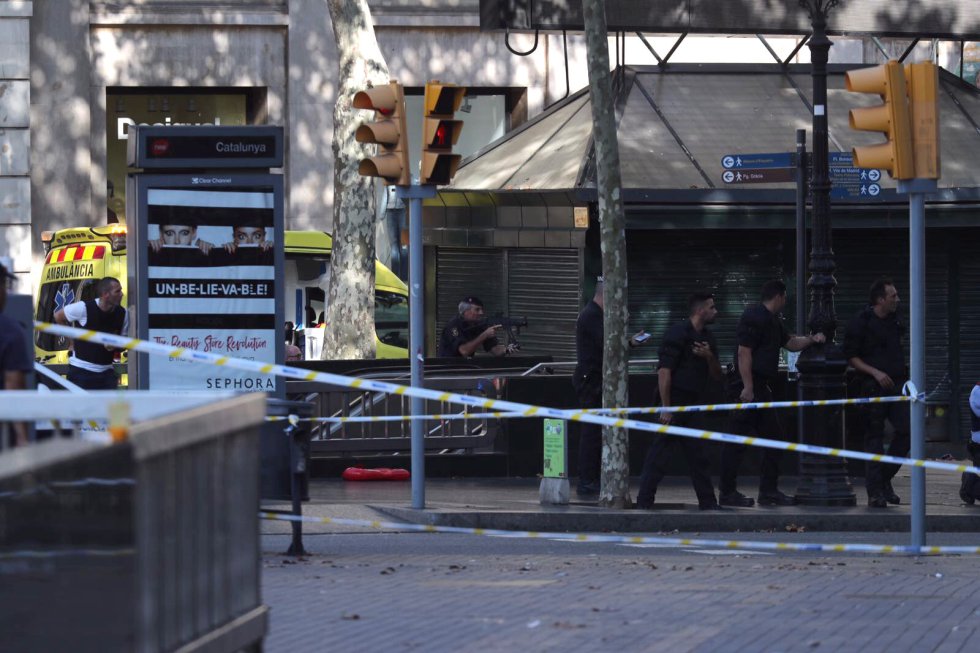 Steven Turner who works around the area spoke to BBC about the incident. He said;

People in my office saw a van ramming into people on Las Ramblas.I saw about three or four people lying on the ground. There are lots of ambulances and armed police with assault rifles around now.

The driver of the van later fled on foot after ramming into the crowds.

Another eyewitness of the incident, Aamer Anwar said;

All of a sudden, I just sort of heard a crashing noise and the whole street just started to run, screaming. I saw a woman right next to me screaming for her kids. Police were very, very quickly there, police officers with guns, batons, everywhere. Then the whole street started getting pushed back.

Police officers who got there just started screaming at people to move back, move back. 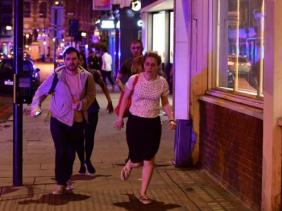 Police in London are responding to an incident on London bridge after reports that a van hit pedestrians on London bridge. The witnesses at the scene said they had seen a white van mount over the pedestrian bridge and drive into people. 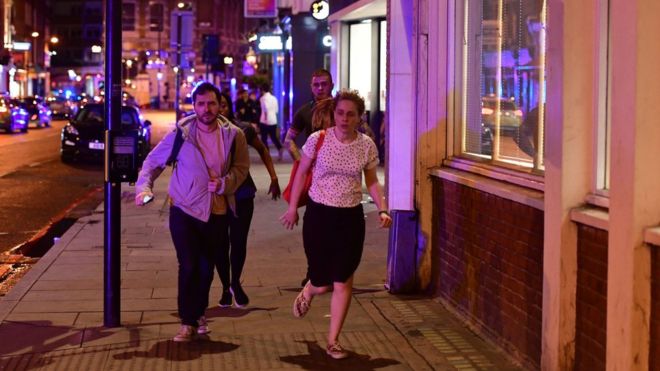 The transport for London said the bridge is now closed from both said  due to the "major police incident".

According to a BBC reporter, Holly Jones, who was at the bridge at the time of the incident said that the man was  "probably travelling at about 50 miles an hour".

About 15-20 people have been injured after the van hit them. Ms Jones then said that she saw a man with no shirt on, handcuffed and taken away by the police. 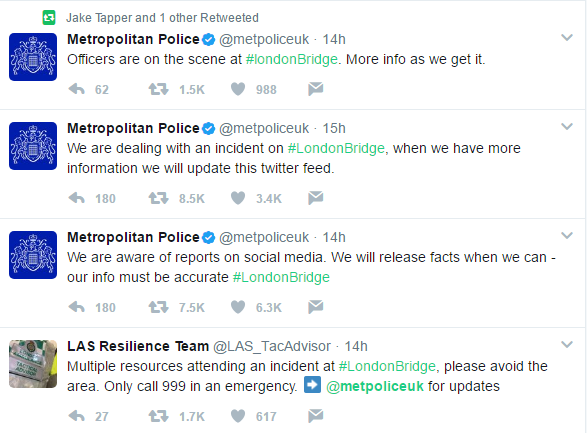 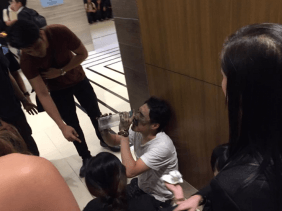 Authorities in Manila, Philippine have confirmed the death of 36 people after a series of gunshots, explosions and fire erupted at the Resorts World, Manila, a casino and resort on Manila Bay in the Philippines.

According to the BBC, the attack was carried out by a lone gunman who was attempting robbery at the hotel. The Philippine police chief said that there was no evidence that the attack was related to terrorism, and there was no reports of a gunshot wound. The body of the gunman was later found dead in what police called suicide at the adjacent hotel on Friday.

According to the Metropolitan Manila police chief Oscar Albayalde, the bodies of those dead people were found in a smoky room by firefighters, and they have all died from suffocation and smoke inhalation, no gunshot victim was found.

The President Trump White House in its response to the attack, said; "It's really very sad what's going on throughout the world with terror."

The local Red Cross team leader, Fernando Atienza, while speaking to the Manila Times report said that at least 25 people were injured from the attack, as many of the victims were jumping from the second floor of the hotel. 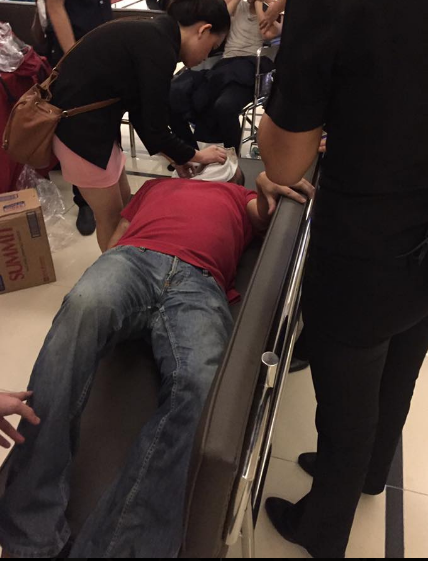 One of the casion dealers that witnessthe mayhem said that there are more than one attackers, and one of them poured flammable liquid on the casino table and burned it.

The Philippine has been a target of ISIS attack recently, with President Duterte declaring a martial law in the city of Mindanao to combat the group. 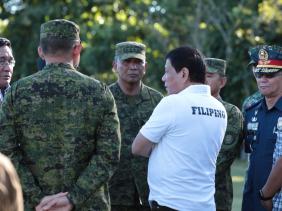 Philippines President, Rodrigo Duterte declares martial law in the entire Island of Mindanao after the Maute terrorist group clashed with the government troops in Marawi City.

In a briefing in Moscow, the presidential spokesperson, Ernesto Abella made the announcement on the order of President Duterte. Abella said the martial law will be in the city for 60 days and this is possible under the country's own constitution. 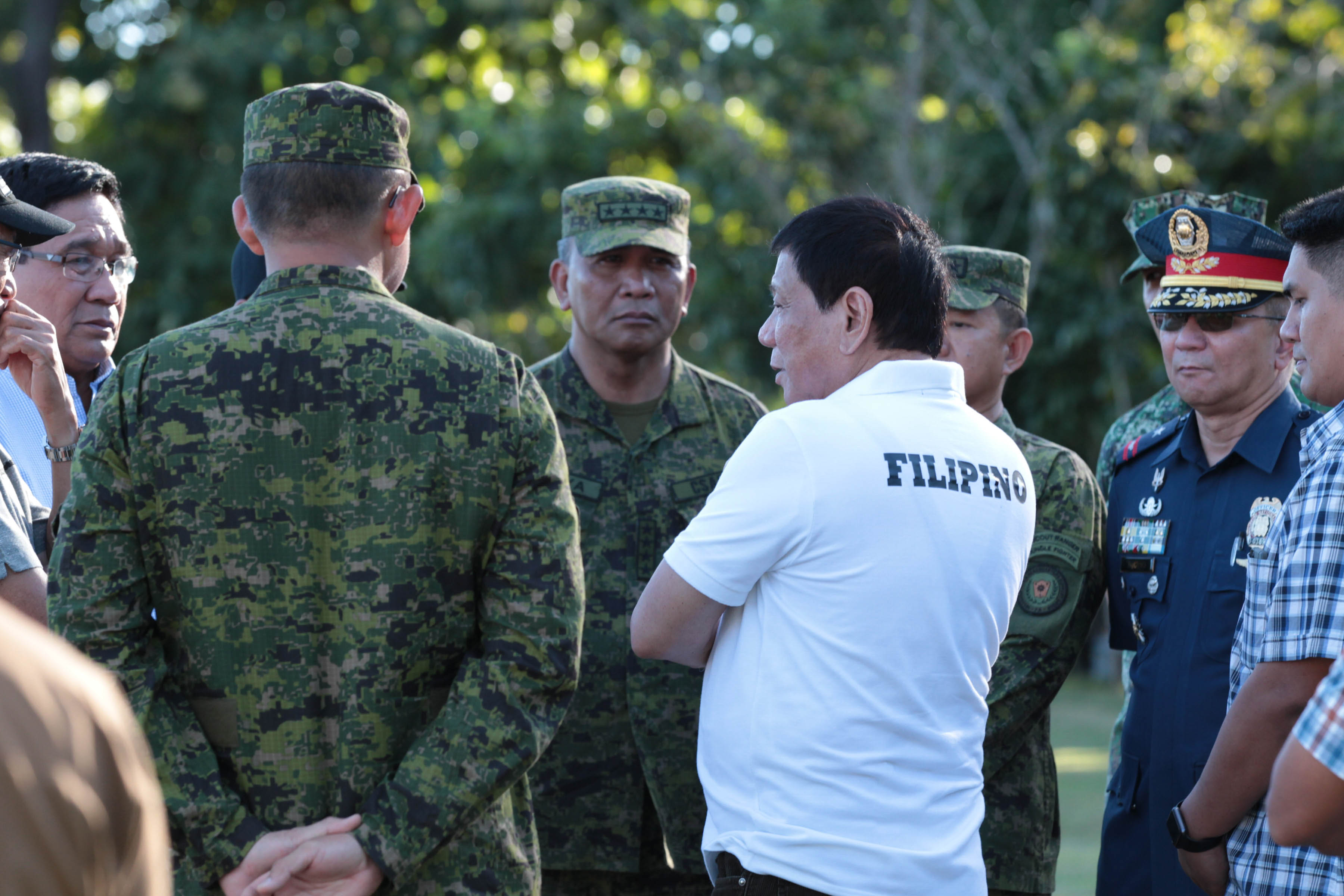 The new martial law will take hold in Mindanao including Basilan, Sulu, and Tawi-tawi. The new resistance by the Maute group has affected the President's travel plan as he looks into postponing his meeting with Russian Prime Minister Dmitry Medvedev, and travel back to Manila, Philippines.

President Putin will also meet with Duterte on Tuesday instead of their plans to meet Thursday.

The recent clash in the Island of Mindanao has seen 2 soldiers and one police officer killed, and 12 others wounded.

Defence Secretary Delfin Lorenzana also said that the group occupies a street and two bridges, and had asked for reinforcement from other units to join them in the fight, as they tend to prove to ISIS in Syria they are a group to reckon with.

The whole of Marawi City is blacked out. There is no light and there are Maute snipers all around so the troops are still on holding and several groups of element already joined them from other neighboring units.

Lorenzana also said that more troops will arrive in the city on Wednesday.

Like every trademark of terrorist organizations, they had destroyed St. Mary’s Church,the Ninoy Aquino School, the city jail,and Dansalan College.

The Government has urged people in Mindanao to stay indoors or flew from the Island whenever it is safe. 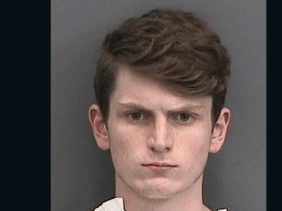 A White male former New-Nazi that got converted to Islam, Devon Arthurs, 18, has been charged with the killing of his two friends, Jeremy Himmelman, 22, and Andrew Oneschuk, 18, who he claimed were "disrespecting" his new faith. 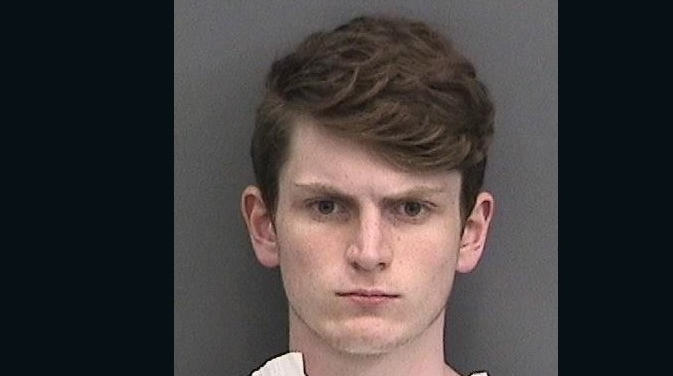 Armed with a semi-automatic pistol, Authurs also held three people to hostage near the Green Planet Smoke Shop on Friday evening near the aprtment he shared with his two other friends.He told hostages he is "upset due to America bombing his Muslim countries" and shouted "Allah Mohammed!" while he was walked to a police patrol car, after a negotiation, where he surrendered himself to the police.

According to police documents, Arthur said;

I had to do it,This wouldn't have had to happen if your country didn't bomb my country.

When police to Arthur to the Tampa Palms apartment, they found the body of Himmelman and Oneschuk, both had been shot in the head and upper body. Also, outside the aprtment is Russell, who serves in the  Army National Guard crying, and dressed"full US Army camouflage".

The four men all lived together and shared their Neo-Nazi beliefs until Arthur converted to Islam.

The FBI found the photo of the perpetrator of the Oklahoma City bomber, Timothy McVeigh in the bathroom of Russells 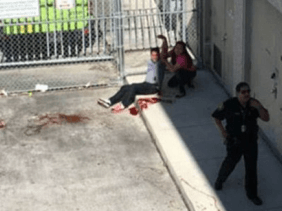 A gunman is now in police custody after killing 5 people and injuring 6 others at the  Ft. Lauderdale-Hollywood Airport, Florida. The shooting happened in the baggage area of the Terminal 2, and the shooter did not breach the TSA secured area of the terminal. The shooting happened at around 12:55pm on Friday.

Broward County’s Sheriff said the gunman is a lone shooter, and was quickly arrested and in police custody at the time of writing.

According to the FAA, Authorities have cleared the terminal of gate D4 and D5, located at the north of the airport, they have also closed the lower level between terminal 2 and 3. Terminal 2 is also closed.

Airport employees and hundred of passengers were all cleared out from the area, and escorted into the tarmac.

All flights scheduled to land at the airport, are still allowed to land, and are not diverted. Extra precaution and security measures have been put in place, but all operations are back to normal.

Travellers have been advised to contact their airline before going to the airport. 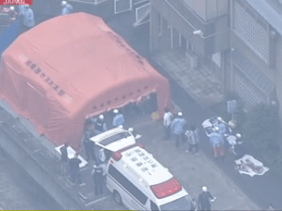 Police have confirmed 15 people dead  and 45 others injured after a knife-wielding man went on a rampage in a disabled facility in the city of Sagamihara, west of Tokyo.

Police said they received a call at 2:30am in the morning on Tuesday that a man carrying a knife had entered the building. At 3AM, police arrested a young man who turned himself in at the police station in the city.

The suspect said he was a former employee at the Center, and he did the killing. He is currently held for murder, but the reason for the rampage is currently unknown. 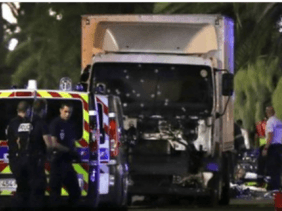 Tragedy rocked France after a truck driver plows his truck into a crowd late Thursday, killing at least 77 people at the time of writing. The attack happened on Bastille Day, a major holiday in France, where victims were enjoying fireworks and were walking down a promenade, either back home or to their cars.