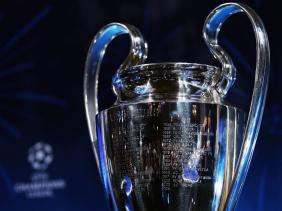 If a poll was to be taken by any credible pollster on who will win the Champions League trophy in 2017, a lot of sport lovers would have gone for teams like Barcelona, Real Madrid, F.C. Bayern Munich, Atletico Madrid, and few optimistic football fans might be expecting another Leicester City FC magic to take home the trophy. Moreover, there have been cheering, tears, strength, tactics from all the participants of the football team, but at the time of the writing, the semi-final draw is here, and the team that will be playing are:

The matches according to the latest draw will be;

The Paths To Victory

Betting Top 10 sites are in between Real Madrid and Juventus giving them 7/4 or 13/8 odds, but that’s only speculations;

Monaco is not seen as the favourite for winning the Champions League, and no sport analyst or football fans see them as a threat, and have thought they would be out of the game in no time, but instead had done it slow and steady, beating 2 Spanish big team Sevilla and Villareal in the playoffs and group stages and round of 16, they also Premiership team like Tottenham and Man City.

The team will be meeting with Juventus in their semi-final games, after winning Dortmund.

Atlético Madrid, are always a hand reach to the trophy, then they lose, this happened in 2014 and 2016. They are very tough, fearless and most teams don’t even see them winning until after 90mins.

Real Madrid is one of the most successful team in the league at the moment, with players like Ramos, Benzema, and the world best, Ronaldo, any team would fear meeting Real Madrid, and while Barcelona would have given them a tough time, it is out of the UEFA Champions League, thanks to Juventus.

Juventus F.C: Is one of the favourites to win the UEFA champions league, especially after beating a team like Barcelona, which is one of the best teams in Spain and in the world. Barcelona is also known for coming back to win after a loss at away matches, while they did that against PSG, Juventus while in Spain seems to bring their team bus to the field, as the defence area was tight Neymar and Messi had trouble dribbling past it.

They are meeting AS Monaco, and everybody assumes they would win the game easily as Monaco might not pose too much of a threat as Barcelona.

With careful consideration and statistics by the different team, I am predicting and would be supporting Juventus for the win of this year Champions League. 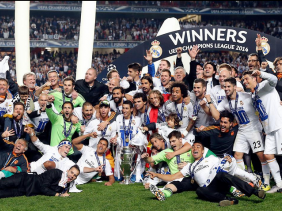 The Real Madrid team is the champion of the UEFA champions league, after winning Atletico Madrid in a very interesting match. The match started with a very high spirit from both teams as they played fiercely to win the league cup.

The match was extended to the extra time and in the 109th minute, Di Maria showed moved with great speed and dribbling past the Atleti defenders, which after a shot. The shot was punched back by the Atleti goalkeeper but not far from the goal post and Gareth Bale confirmed the goal with a nice header giving Real Madrid the lead goal of 2-1.

In the 117th minute, the Atletico Madrid defense is a little bit vulnerable as Marcelo moved the ball slowly after receiving a pass from Christiano Ronaldo, he was not stopped by the defenders, hence a nice shot beating the goal keeper the third time, which givers "The whites" a lead goal of 3-1

in the 119th minute, a penalty is awarded to the Real Madrid team and Christiano Ronaldo took the penalty kick perfectly past the goal keeper the fourth time, and this concludes the 4-1 victory of the champions league making the Real Madrid club won the cup for the 10th time, an achievement called the "La Decima"

Speaking after the match is the Atletico Madrid coach,Diego Simeone said :

This game doesn’t deserve a tear, when you give your all, there’s nothing to say 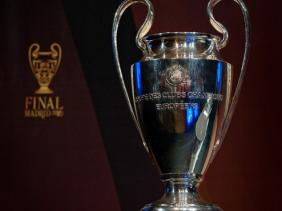 We are the champions...tarararar....That is the sound all football lover should be humming at this time because in few hours, the game we all loved so much is coming to an end, UEFA champions league final and the team that will be entertaining the world in Lisbon are Real Madrid and Atletico Madrid.

So both teams have a very tough starting eleven. But the 2 players to watch out for especially when they are with the ball are Cristiano Ronaldo and Diego Costa. While Diego had scored 8 goals in this tournament, Ronaldo scored 16 goals.

Real Madrid walkthrough to the Finals

With a good football in their group stages, Real Madrid were the top in the group after beating FC Copenhagen, Juventus and Galatasaray.

Real Madrid took the next flight(Second Round)  and  Schalke 04 was the victim and if you saw that match, it was like  Schalke 04 coach(Jens Keller) cheated on the wife of Carlo Ancelotti and he decided to revenge with the football game with a 9-2 win on aggregate...It was like fun for Real Madrid boys after a 6-1 in an away match and another 3-1 at the Bernabeau.

Real Madrid met with the same team that sent them out of the league last season, Borussia Dortmund. This was not a game served on a gold platter because even though Real Madrid won the match at their home ground with a 3-0 win, but almost fell to the Jürgen Klopp boys as they played 2-0 making the game 3-2 on aggregate. It was a tough game for Madrid that night on the BVB home ground.

The Semi-Finals : This is where you tell your neighbour,Real Madrid is here to lift the UCL. The Real Madrid team met with the reigning champion of the UEFA champion league, Bayern Munich. We were all expecting a great show for our money, but Real Madrid entertains us for the worth of the money with a 5-0 on aggregate to move to the big game finals. They had secured a 1-0 victory and while we all expect some magic game from one of the team rival coach, Pep Guardiola, who had managed Barcelona and we expect him to know the tricks of the trade was showed the other way round by the Ancelotti boys with a victory of 4-0 or like Patrick Wright will say 4 Nil.

Atletico Madrid walkthrough to the Finals

The Atletico Madrid team started well from the group stage as they won other group team like Zenit Saint Petersburg, Austria Vienna and Porto.

The second game was a walk in the park as the Atleti team won one of the best Italian team, AC Milan with 5-1 aggregate. Ac Milan won't forget the name Diego Costa.

Moving ahead, the new La Liga champion, shows one of it's finest game as Coach Diego Simeone team played a 2-1 on aggregate in the Quarter finals. Diego Costa played a good match here, Koke finished the game, with Neymar scoring the 1 goal in the first leg.

José Mourinho might not see the winning of the Atleti team as he is referred to as the special one.Nothing was special about the match as the Atleti played a 3-1 on aggregate to knock out Chelsea from the UCL campaign. Twitter went agog on the night of these matches, home and away as everyone claimed Chelsea will be playing Real Madrid in the finals and this might have given José Mourinho the chance to meet his former club Real Madrid.

But Simeone boys had a special plan for the special one(José Mourinho). After a 0-0 game at Vicente Calderón Stadium, the Atletico Madrid team traveled back to Stamford bridge and the whole twitter chorused the same nursery school rhymes,

London Bridge is falling down, my dear Chelsea.

While Real Madrid might be a lot of fan favourites, we also should not forget that Atletico Madrid is the La liga champion. Some games played between the 2 team as they are both spanish team includes a 2-2 draw and copa del rey with Real Madrid winning 5-0

When is the UCL Finals?

Lisbon, at the Estadio le Luz stadium and also home to the Benfica team.

Where can i watch it?

If your cable Tv is not showing the match, get a refund at the end of the month or head over to your computer and tried our tech blog on how to watch Football matches online, here,  here and here.

Difficult to decide who wins, so we should all enjoy the UEFA champions league final